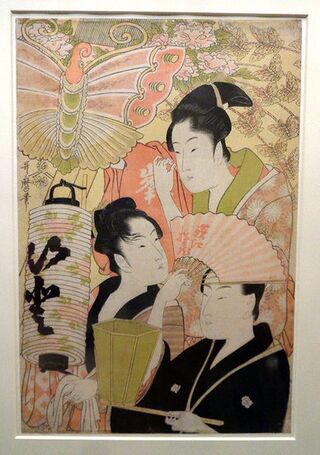 Niwaka performers, in a woodblock print by Utamaro, 1793

Niwaka were amateur farcical plays popular from the early 18th century onwards; closely based on professional kabuki plays of the time, niwaka performed by courtesans of the Yoshiwara were particularly popular, and sometimes depicted in ukiyo-e prints.

In Edo, niwaka performances by courtesans came to be a regular annual event in the Yoshiwara; they were performed in the 8th month each year, as part of a festival dedicated to the kami Inari. The festival also involved a parade through the Yoshiwara, in which courtesans in various costumes rode on floats, and stopped at teahouses to perform skits and dances.

A prominent element in niwaka performances was the practice of courtesans dressing up as "Tôjin" (foreigners), in costume drawn from a mix of Chinese, Korean, European, and fanciful elements. Niwaka got their start in 1767, and some scholars have suggested that from the very beginning they were directly and strongly influenced by the 1764 Ryukyuan and Korean embassies to Edo, and by Tôjin performances which were a regular part of the Tenka Matsuri (major annual festival processions in Edo). It has also been suggested that this farcical, playful, performance of foreignness may have metaphorically enhanced or emphasized the feeling of the Yoshiwara as being "another place," distinct from the everyday world;[1] however, it might also have simply been a matter of fun.

Similar performances, called Gion nerimono, also took place annually in Kyoto, in conjunction with Gion Matsuri. Niwaka prints produced in Kyoto included not only those made in the standard woodblock manner, but also kappazuri (stencil) prints.