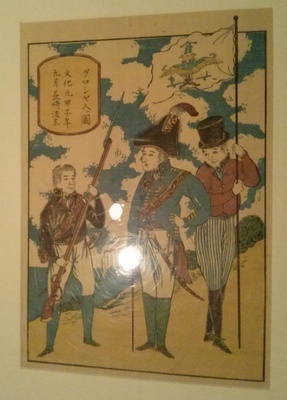 Rezanov and his men, as seen in a c. 1830 woodblock print

Nikolai Rezanov was a Russian envoy sent to Nagasaki in 1804 in order to attempt to secure commercial trade access for Russian ships.

Rezanov arrived in Nagasaki in 1804/9, bearing a permit granted to Adam Laxman in 1793, permitting him simply to enter into negotiations. His two ships were commanded by Adam Johann von Krusenstern, who had a few years earlier presented to the court at St. Petersburg suggestions for a more active maritime engagement in the Pacific, tying together Russian settlements in Siberia and North America with markets and sources of food and other goods elsewhere in the Pacific.

In approaching Japan at this time, the Russians hoped that with the Dutch East India Company severely weakened in the aftermath of the Napoleonic Wars, it might create an opening for them to be able to enter into trade with Japan. It was hoped they could trade furs, walrus ivory, fish, leather goods, and woolen cloth for silk, rice, and copper, as well as other luxury goods such as porcelains and lacquerwares. Given the great distance between Russian settlements in Siberia and Alaska, and Russia's breadbasket in eastern Europe / central Asia, it was also hoped that such a trade relationship could help feed these areas.

Rezanov sat in harbor at Nagasaki for several months, as port defense forces from Fukuoka han stood at alert, before being dismissed in 1804/11. Port officials met with him, and asked a variety of questions, including inquiring as to which products Russia would offer in trade, how many ships would come and how often, and whether they would come to Japan from Europe or from Kamchatka. Rezanov replied that it would be impossible to discuss all these various issues at once, and that some would have to be determined in further, later, negotiations. Ultimately, he was denied any trade permissions, and was sent away early in the next year (1805). He died on the way back to St. Petersburg, but his subordinates Khvostov and Davydov enacted his plans to assault Japanese shipping and settlements in 1806-1807, and to demand from the shogunate a decision allowing for Russian trade; this resulted in the shogunate taking a harder stance than before, ordering Russian ships to be repelled by force.[1]

In 1806, Rezanov led a mission which explored the California coast.[2]