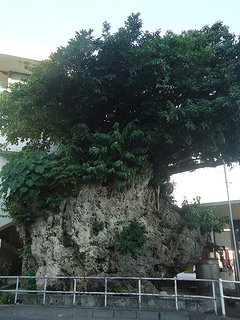 One of the famous Nakashima nu ufuishi, seen at the Naha Bus Terminal.

As the name implies (Nakashima literally means, roughly, "island in the middle"), Nakashima was once a tiny island unto itself. The water which separated it from the "mainland" was stopped up, and a small canal was built. A bridge provided access to the district.

Nakashima is one of eight sites in Naha featured in Hokusai's Ryûkyû hakkei, a series of landscape prints released in 1832, based upon the 1757 Chinese volume Liuqiu-guo zhilue. In both Hokusai's series and the Chinese illustrated book, the scene is entitled Chûtô shôen, or "Banana Garden at Chûtô (Nakashima)."

Nakashima was a popular gathering place for aristocrats, who were fond of poetry and literature, and one of the women of the district, Yoshiya, has come to be among the most famous of all Ryukyuan poets.

The district was closed in 1908, along with that of Watanji. All the women of the district moved to Tsuji, and the district quickly became filled with commoners' homes.

Nakashima is also famous for the Nakashima nu ufuishi, or "Large Stones of Nakashima," natural outcroppings of stone similar to the meoto iwa, or offshore stone outcroppings seen in various places along the shore in Japan. The Nakashima Stones were noted even by visiting Chinese investiture envoys as sights of note (景勝), and in terms of geomancy or feng shui, are considered to be the dragon's pearls, where the great gate of Kumemura was the dragon's head or neck. Thus, despite being located in Nakashima, the stones were traditionally considered within the jurisdiction of Kumemura.

At least one such stone can still be seen today, at the bus terminal in Shimoizumi. Roughly six meters high and roughly twenty meters in circumference, the stone has been designated a Cultural Property by the prefecture.