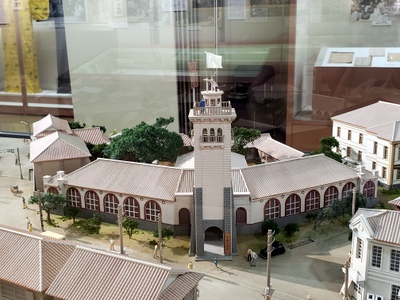 The Naha City Office, in a model of central Naha in the 1930s, Naha City Museum of History.

The Naha City Office was established in conjunction with the establishment of the modern prefecture of Okinawa in 1879, to oversee the administration of the prefectural capital of Naha, which was made up of the Nishi, Higashi, Wakasa, and Izumisaki districts, plus the former villages of Kumemura, Tomari, and Kumoji.

The office was originally based in a former lumber storehouse on the banks of the Kumoji River. Separate rooms were designated for the administration of each of the seven districts. Officials working at the City Office continued to wear traditional Ryukyuan dress and hairstyles - long robes with a wide belt (ufu-obi), and long hair wound up in a bun atop one's head.

The Office was relocated in 1893 to the former site of the Tenshikan, a guest house for visiting Chinese investiture envoys, where it remained until its destruction in the 10/10 air raid in 1944. Meanwhile, the original location of the City Office became a printing house for the Ryûkyû Shimpô newspaper from 1903 to 1937.