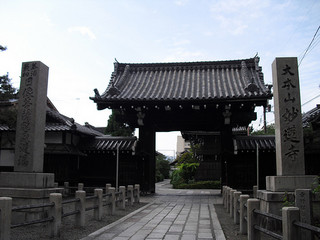 Myôren-ji is the head of Kyoto's 21 temples of the Hokke sect.

The temple has its origins in a temple called Yanagi-dera, established in 1294 by the saké merchant Yanagiya Nakaoki, converted from his residence at Nishi-no-tôin in Kyoto. Around 1420, the temple was dismantled and re-established at Ômiya-Shijô-sagaru under the name Myôren-ji. This was done by Nichizô, a grand-disciple of Nichiren, along with a number of his cohort. Myôren-ji was relocated numerous times over the years, most recently moving to its current location in 1587.

The stones and gold-backed fusuma (sliding doors) in the oku shoin (rear study) are said to have been donated by Toyotomi Hideyoshi. The temple's treasures include paintings by members of the school of Hasegawa Tôhaku, and a work of calligraphy by Hon'ami Kôetsu.

The grounds include a grave claimed to be the burial site of the hair of the 46 of the 47 Ronin who committed suicide. The one survivor, Terasaka Kichiemon, is said to have brought the hair to the sister of Kataoka Minamoto Goemon, who saw it buried here in 1704. The grave was damaged by the elements over the course of the centuries, and was restored in 2002.