From SamuraiWiki
(Redirected from Minamoto Yoshiie)
Jump to navigationJump to search 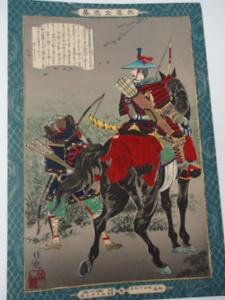 Minamoto Yoshiie, a man who came to embody the spirit of the samurai and a legend even in his own time, was the son of Minamoto Yoriyoshi (995-1082). Yoriyoshi, the third generation of the Seiwa Genji, was a noted commander, and in 1051 was commissioned to defeat the rebellious Abe family of Dewa Province. The Abe had for years held prominent posts in this distant, forbidding region, and had come to assume a certain autonomy. Like Taira Masakado, the Abe had been tasked with subduing the northern barbarians, and, from the Court’s point of view, become barbarians themselves. They were in fact described as ebisu, a somewhat generic term which was also applied to the Ainu.

Yoriyoshi’s chief opponent was Abe Yoritoki, an unscrupulous character who died of an arrow wound in 1057. By this point in the so-called Former Nine-Years War, Yoriyoshi’s son Yoshiie had joined the expedition. A promising young warrior, Yoshiie participated in the Battle of Kawasaki (later in 1057) against Yoritoki’s heir Sadato. In a snowstorm, the Minamoto assaulted Sadato’s stronghold at Kawasaki and were driven back; in the course of the hard-fought retreat Yoshiie distinguished himself and earned the nickname ‘Hachimantaro’, or ‘First son (or First born) of the God of War (Hachiman)’. Abe Sadato comes across as an altogether more impressive man than his father, and proved a formidable foe even for Yoshiie and Yoriyoshi. Yet the Minamoto cause was much assisted by the enlistment of Kiyowara Noritake, a locally powerful figure whose rugged northern men swelled Yoriyoshi’s ranks.

In 1057 the fighting culminated in a series of actions that further enhanced Yoshiie’s reputation. Sadato had attacked the Minamoto troops but suffering a reverse retreated into a fort by the Koromo River. Yoriyoshi ordered a spirit assault on the fort, which Sadato was forced to flee. During the chaotic retreat, Yoshiie was supposed to have chased Sadato and had an impromptu renga (linked verse) session with his enemy from horseback, afterwards allowing him to escape. The probability that the incident actually occurred is next to nil, but it made Yoshiie seem all the more colorful, and gave him an opponent worthy in both warfare and culture. In fact, the war was nearly over. Sadato continued his flight until he reached another fort, this one on the Kuriyagawa, and prepared for another stand. The government troops arrived and after a few days of fighting brought the fort down. Sadato and his son died, and his brother Muneto was captured. Yoshiie gave thanks to his namesake by establishing the Tsurugaoka Hachiman shrine near Kamakura on the way back to Kyoto. Yoriyoshi was awarded the governorship of Iyo Province for his services against the Abe while Yoshiie was named Governor of Mutsu. Interestingly, Abe Muneto was released into the custody of the Minamoto and lived in Iyo, becoming a companion of Yoshiie’s. In 1082 Yoriyoshi died.

In 1083 Yoshiie was commissioned by the Court to subdue another rebel, this time against the same Kiyowara family who had assisted the Minamoto in the previous war. After the Abe’s defeat, the Kiyowara had been elevated and filled the power vacuum in the north. A power struggle had broken out among various family members, and in the end Yoshiie was sent to quell the disturbance. The conflict became known as the Later Three-Year War and culminated, after a setback at Numu (1086), in the Battle of Kanazawa. In an incident that became a famous military anecdote, Yoshiie’s men were advancing to contact when a flock of birds began to settle in a certain spot then abruptly flew off. Yoshiie suspected an ambush and had the place surrounded, sure enough revealing the enemy army. Yoshiie went on to reduce Kanazawa through siege and the Later Three-Year War drew to a close. The Court was pleased that the Kiyowara had been suppressed, but viewed the conflict as outside the Court’s responsibility, as technically Yoshiie had not been commissioned by the emperor to fight. This meant that no rewards would be distributed to Yoshiie’s men, an unfortunate situation Yoshiie remedied by paying them himself with his own lands. This action greatly enhanced Yoshiie’s reputation and also secured lasting bonds of loyalty for the Minamoto in the Kanto region, bonds that would pay dividends in the following century.

Stinginess aside, the aristocracy held Yoshiie in near-awe, and Fujiwara Munetada dubbed him ‘The Samurai of the greatest bravery under heaven.’ At the same time, the Court kept Yoshiie at arm’s length. It did go so far as permitting Yoshiie to visit the Imperial Court in 1098; a rare honor that by it’s very rareness indicates the widening gulf between the Court and provincial houses. This alienation would in the end contribute to the eclipse of Imperial authority by the samurai in the later 12th Century.

Shrouded in mystery, elevated to an almost godlike status in the old chronicles, it is difficult to place Minamoto Yoshiie in a historical context. His greatest political contribution was probably in strengthening the Minamoto family, especially those branches residing in the Kanto. His other contribution was less tangible. The legend of Minamoto Yoshiie, who emerged from his northern wars and the chronicles as a cultured man of war, established a model for future samurai that would influence generations of warriors to come.