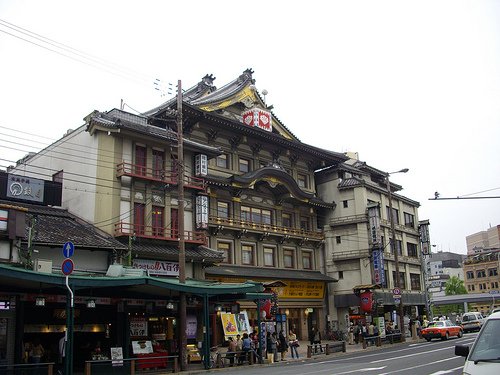 The Minami-za, located at Shijô-Ôhashi, is the chief kabuki theater in Kyoto.

Since the Muromachi period, the Shijô-Kawaramachi (the dry riverbed area near Shijô Avenue in Kyoto) had been a vibrant, active site of entertainments, including dengaku, sarugaku, and other sorts of performances aimed at raising money for Buddhist temples. These performances were temporarily interrupted by the Ônin War, but eventually got restarted. Early in the Keichô era (1596-1615), the performances that had been based just south of Gojô-Kawaramachi moved a short way north, to Shijô, and in the Genna era (1615-1624), the shogunate permitted the construction of seven yagura (stages). Public works projects in the Kanbun era (1661-1673) created new reclaimed land near the Kamo River, which was made into the Gion entertainment district. By the Genroku era (1688-1704), there were seven theatres in the area, including three on the south side of Shijô-dôri, two on the north side of the street, and two nearby at the intersection of Yamato-ôji and Tokiwamachi-dôri; the Minamigawa no Shibai (later, the Minami-za), was one of these. The pleasure districts of Gion, Miyagawa-chô, and Pontochô were nearby.

Most of these other theatres later went defunct; the Minami-za remains today the chief kabuki theatre in the city, and hosts various other productions, including rakugo, concerts, shinpa and shingeki theatre, and Western-style productions.