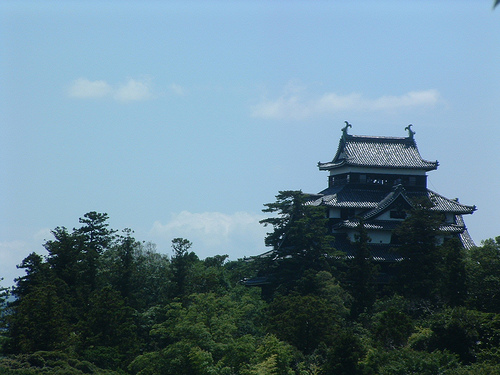 The main tower of Matsue castle.

Matsue castle was the chief castle of Matsue han, located in Izumo province (Shimane prefecture). It is one of the oldest surviving original Edo period castles in Japan, having been constructed in 1607-1611 and never fully destroyed & rebuilt.

Constructed in the Edo period, after the fighting of the Sengoku period had ended, and being located in a relatively remote part of Japan that was not a target of bombing or shelling during World War II, the castle has never seen combat.

Unlike many castles, which used plaster under the eaves of the roof and at the tops of the walls to protect against fire, Matsue went untreated in this way.

The castle was originally constructed by Horio Yoshiharu in 1611. The Kyôgoku clan then replaced the Horio clan, for a brief time in the 1630s. They were then replaced as lords of Matsue in 1638 by the Matsudaira clan of Echizen, who ruled through the end of the Edo period. All nine daimyô of Matsue are buried at a temple nearby, called Gesshô-ji.

This article is a placeholder or stub. You can help SamuraiWiki by expanding it.
Retrieved from "http://samurai-archives.com/w/index.php?title=Matsue_castle&oldid=22052"
Categories: