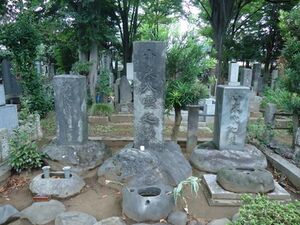 The graves of Lafcadio Hearn (center), his wife (left), and other relatives (right) at Zôshigaya Cemetery in Tokyo

Lafcadio Hearn was a writer, chiefly of works on Japanese culture and folklore, one of the most prominent Westerners resident in Meiji period Japan, and one of the first Westerners to take on a Japanese name.

He was born on the Greek island of Lefkada, but moved to Ireland at the age of six, where he was raised by his great-aunt following his parents' divorce. He lost an eye in a fight or an accident at the age of 16, and lost his father shortly afterwards, being pulled out of school around that same time when his great-aunt came upon financial difficulties. At the age of 19, he then moved to the United States, beginning to work as a journalist and literary translator at the age of 24. He was hired by Harper's Magazine shortly afterwards. While attending the New Orleans World's Fair in 1884, he met Takamine Jôkichi, who was there as a member of the Japanese pavilion.

In 1890, when Hearn was 40 years old, he journeyed to Japan on an assignment from Harper's. He lectured for a time at Tokyo Imperial University before obtaining a position as an English teacher in Matsue (Shimane prefecture) thanks to an introduction from the Ministry of Education. While in Matsue, he met and later married Koizumi Setsu, the daughter of a local high-ranking (former) samurai family. Hearn and his wife later had three children. Her written account of her relationship with Hearn is the earliest surviving written record by a Japanese woman of her relationship with a Western man.[1]

After only 15 months in Matsue, he moved to Kumamoto where he worked as a teacher, and then to Kobe, where he found employment with the Kobe Chronicle. He returned to Tokyo Imperial University in 1896, and though he accepted an offer to begin teaching at Waseda University in 1904, he passed away later that year, at the age of 54.

A Lafcadio Hearn Memorial Museum, first established around 1935 and rebuilt most recently in 1984, operates today in Matsue City.

Hearn is most known for his books relating Japanese folk stories, ghost stories, and other aspects of Japanese culture. His most famous books are probably Glimpses of Unfamiliar Japan, In Ghostly Japan, and Kwaidan.

Other works by Hearn include Chita, Youma, A Japanese Miscellany, Two Years in the French West Indies, Out of the East, Kokoro, and Gleanings in Buddha-Fields.