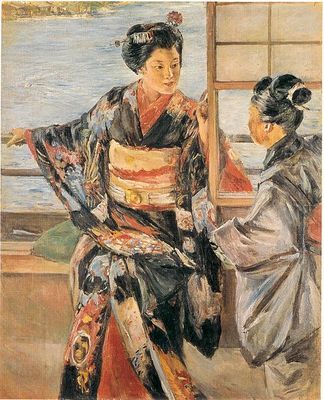 Born into a prominent samurai family in Kagoshima in 1866, he was adopted in 1871 at around age five by his uncle, Viscount Kuroda Kiyotsuna. As a child, Kuroda showed a talent for pencils and watercolors, and studied painting briefly under Hosoda Sueji, a student of yôga pioneer Takahashi Yuichi.

In 1884, he journeyed to Paris with the intention of studying law and pursuing a career in that field. He spent his first year in France studying French, and was admitted to law school in 1887. During that intervening time, however, he ran into a number of other Japanese, including Paris-based art dealer Hayashi Tadamasa and painter Yamamoto Hôsui, who recognized in Kuroda a talent for painting. An occasion in which Kuroda visited the atelier of Raphael Collin while serving as interpreter for Fuji Masazô is said to have played a significant role in his decision to pursue becoming an artist himself. In 1886, after Fuji and Yamamoto's recommending Kuroda to Collin, Seiki began studying under the artist, an Academic painter who had recently become quite popular for his plein-air works in a more impressionistic style. In addition to receiving training in the basics of proper (highly realistic) Academic-style oil painting, Seiki was also encouraged to experiment with plein-air painting, and with impressionistic styles.

One of his works was accepted by a Salon in 1891, and two years later, his painting Morning Toilette was shown at the Salon, the Salon des Beaux-Arts, in Paris. Morning Toilette would cause quite a scandal when shown in Tokyo following his return to Japan in 1893, being one of the first full nudes (in the highly realistic Western style & oil painting medium) ever displayed in a Japanese art exhibition. Due to the controversial nature of the work, it was partially covered by a cloth while on display.

He was named head of the Western Painting section at the Tokyo School of Fine Arts in 1896,[1] and the same year co-founded the Hakubakai ("White Horse Society") group of painters, alongside Kume Keiichirô and Yamamoto Hôsui.

In 1900, Kuroda won a silver prize for his Wisdom, Impression, Sentiment at the Exposition Universelle in Paris.[2]

Kuroda remained a prominent presence in the Japanese art world for the remainder of his life, coming to be known as "the Grand Old Man of Western painting in Japan" prior to his death in 1924.[3] In 1907, he played a role in the founding of the Ministry of Education Exhibitions (Bunten), and was named an official artist to the Imperial Household in 1910. He was later named president of the Imperial Academy of the Arts (Teikoku bijutsu in) in 1922, and at some point was also admitted to the House of Lords.[4]