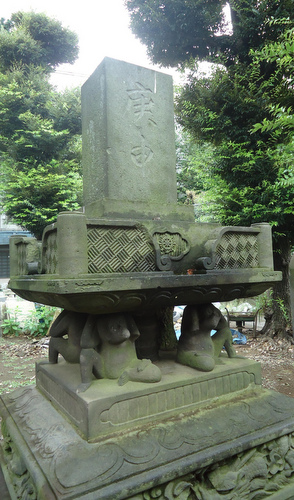 The Kôshin faith is a set of folk beliefs and practices centered around the idea that three worms (sanshi) live within the human body and travel up to Heaven once every sixty days, while the person sleeps, to report on the person's wrongdoings. Practitioners of the Kôshin faith hold events on those days, chanting the Heart Sutra and engaging in other activities throughout the night, without sleeping, so that these "worms" won't go up to the Heavenly Emperor (Tentei) to report on the people's wrongdoings.

Kôshin-zuka mounds or Kôshin-tô stone markers can be found throughout Japan, relating to this faith. They are marked with the two characters kôshin (庚申), indicating that particular day of the sexagenary cycle of 60 days, and are often ornamented with images of the three monkeys as well, the notion of "see no evil, hear no evil, speak no evil" having obvious connections to the idea of the three "worms" not reporting up to Heaven.

Kôshin belief may have begun as early as the Heian period, and certainly enjoyed a following in the Kamakura and Muromachi periods, remaining popular in the Edo period as well.