From SamuraiWiki
(Redirected from Kobo Daishi)
Jump to navigationJump to search 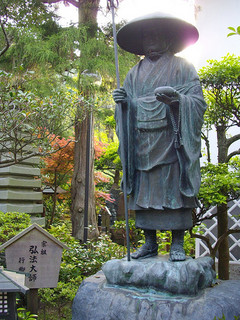 A statue of Kôbô Daishi at Jôjû-in in Kamakura

Kûkai, also known posthumously as Kôbô Daishi, was the founder of Shingon Buddhism in Japan.

Returning from a journey to China in 806, he brought with him ideas of Esoteric Buddhism (Mikkyô) which he had learned there; the sect Shingon, which he then founded, takes its name from the Chinese term zhenyan, a translation of the Sanskrit word mantra.

Kûkai initially established his first Shingon center of worship at Mt. Kôya, in what is today Wakayama prefecture, a good distance from the religious competition and politics of the capital.

Kûkai returned to the Heian capital, however, in 823, when he was made the abbot of Tô-ji; he promptly converted the site into a Shingon temple and renamed it Kyôôgokoku-ji. Tô-ji remains the head temple of Japanese Shingon today.

Following Kûkai's death in 835, he was posthumously named Kôbô Daishi ("The Great Teacher of the Spreading of the Law"), and was buried at Mt. Kôya. According to Shingon belief, he did not in fact die, but remains, rather, in a state of deep meditation, atop Mt. Kôya, awaiting the coming of Miroku (Maitreya, Buddha of the Future). A massive graveyard can be found on Mt. Kôya today, including the burials of a great many prominent historical figures, among others, who chose to be buried there in order to eventually follow Kûkai into salvation.

Kûkai is regarded one of the "three brushes," or three great calligraphers of his time, alongside Emperor Saga and Tachibana no Hayanari.[1]

Statues of Kôbô Daishi are a common sight at temples in Japan, and are easily recognizable by the signs of a traveling monk's outfit, including the round hat and staff with rings at the top. The bodhisattva Jizô is often depicted similarly, however.