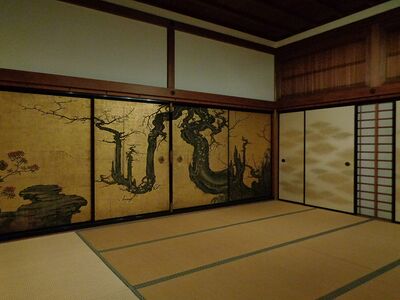 "The Old Plum," a set of fusuma paintings by Kanô Sansetsu, c. 1647, on display at the Metropolitan Museum of Art in New York

Most of Sansetsu's surviving works are fusuma paintings used as decoration in Buddhist temples. His style is said to have played a role in influencing or inspiring Eccentric painters such as Itô Jakuchû and Soga Shôhaku.[2]

Sansetsu was the chief compiler of the Honchô gashi, a volume generally regarded as the first "complete" history of Japanese painting. The compilation of the volume was continued under Sansetsu's son Kanô Einô.[3]