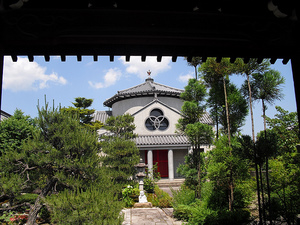 The main hall at Jûnen-ji.

Jûnenji is a Jôdo-shû Buddhist temple in Kyoto's Teramachi district. It was founded in 1431 by Prince Shinna, son of Emperor Go-Kameyama, on the orders of Shogun Ashikaga Yoshinori, and was moved to its current location by Toyotomi Hideyoshi in 1591.

The main hall, built in 1993 and designed by a monk from Isshin-ji in Osaka, is rather distinctive in style, incorporating traditional forms with post-modern elements. It houses a statue of Amida Nyorai which is said to date back to the Heian period, and to have previously stood at Ungoji in Higashiyama.

A number of prominent historical figures are buried there, most famous among them being Ashikaga Yoshinori.