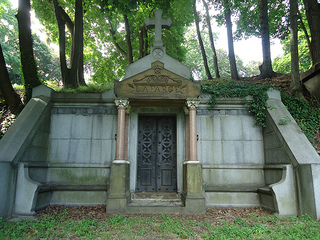 The mausoleum of John LaFarge at Brooklyn's Green-Wood Cemetery.

John LaFarge was one of a number of prominent Bostonians of the late 19th century who journeyed to Japan, and who played a role in introducing Japanese art to New England. A Boston-based painter and designer of stained glass windows, some of his most famous works include the stained glass windows and mural paintings at Boston’s Trinity Church, as well as paintings of sights in Japan, Hawaii, Samoa, and other places he visited on his many journeys.

LaFarge was a great-nephew of Commodore Matthew Perry on his father’s side, and a descendant of the Mayflower Pilgrims & Plymouth colonists on his mother’s side.

He journeyed to Japan in 1886 with his friend Henry B. Adams, and upon his return to New England produced many artworks depicting Japanese subjects or themes.