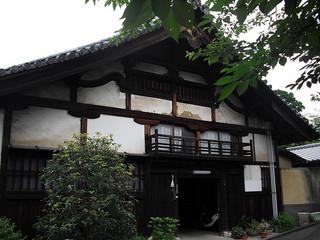 One of the buildings at Jôbonrendai-ji.

Jôbonrendai-ji is a Shingon Buddhist temple in Kyoto, famous chiefly for its associations with the Buddhist sculptor Jôchô, who is buried within the grounds.

The temple is said to have been founded originally as Kôryûji by Shôtoku Taishi, taking the name Jôbonrendai-ji when it was rebuilt in 960 upon the wishes of Emperor Uda.

The sculptor Jôchô joined Jôbonrendai-ji when he took the tonsure around the year 1050, and founded a sub-temple called Shômei-in, which boasted twelve monks at the time of its establishment.

The temple complex lost many of its buildings in the Ônin War (1467-1477), but much was rebuilt in the 1590s; the high priest Shôsei Shônin also established twelve sub-temples in the area at that time, earning the temple the name "Jûnibô," or "twelve monks."

Jôbonrendai-ji possesses a number of notable treasures, including a piece of calligraphy in which the Emperor Murakami inscribed the name of the temple, as well as the Eingakyô illustrated sutra scroll (a National Treasure), and paintings of Jizô bodhisattva and Monju bodhisattva which are considered Important Cultural Assets.