Suzuki Okura was born in Hitachi as a son of Shizuku han Samurai. His family was expeled from the han when he was little. Okura left from family same time and moved to Mito to study which strongly effected him to be Sonno. Later he moved to Edo, became pupil of Ito Seiichiro dojo of Hokushin Itto Ryu. He married to dojo master's daughter and inherited the dojo. (His name changed to Ito Okura) 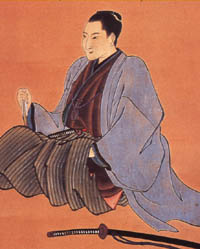 Kondo Isami adored his intelligence and treated him as executive officer in the begining. But they had opposite political philosophies. Kondo was Sabaku, Ito was Tobaku.

In 1867 shortly after Emperor Komei died, Ito Kashitaro group separated from Shinsengumi and formed Goryo Eji. Goryo Eji means "Guards of Emperor's tomb". They moved to Choen-ji, later moved to Kodai-ji. They became under the protection of Satsuma han secretly. On November 18 (12/13/1867), Kondo invited Ito to his resident in Samegai. Ito was assassinated by Shinsengumi members on the way to Kodai-ji at the night. The Goryo Eji members who came to pick up his body were also attacked. (Incident at Aburano Koji)

This article is a rough draft which is in need of cleanup (grammar, spelling, corrections, links, formatting, etc.). You can help SamuraiWiki by editing it. Click here for a list of articles that have been tagged as a draft copy.
Retrieved from "http://samurai-archives.com/w/index.php?title=Ito_Kashitaro&oldid=29089"
Categories: