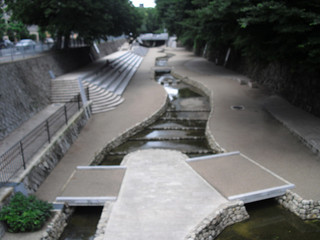 A section of the Horikawa as it appears today.

The Horikawa is a river in Kyoto which was a major transport route during the Heian period.

The river is today sunken and partially covered. It is flanked on both sides by the road known as Horikawa-dôri, which was originally known as Horikawa-kôji when it was built in the Heian period. Many lumber merchants, including some who transported lumber up to Kyoto from Tamba province along the Katsuragawa, resided in one area alongside the river.