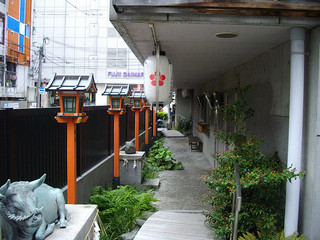 Hiyoke Tenmangû is a small Tenjin shrine in Kyoto's Teramachi district. It is said to have been established in 1579, when a Shintô priest from Dazaifu (the location of one of the most major Tenjin shrines) arrived in Kyoto with a statue of Tenjin for which he desired to build a shrine.

The shrine was relocated twice before that century came to an end. In 1587, it was moved onto the grounds of the recently completed temple Daiun-in at Karasuma-Nijô, and ten years later, it was moved again to its current location near Teramachi-Shijô.

During the Hamaguri Rebellion of 1864, this neighborhood was among the only ones spared damage from the fires which ravaged the city. It was thus believed that the shrine protected the neighborhood, and since then it has come to be a shrine associated with protection from fire. The name Hiyoke Tenmangû ("Tenjin Shrine of Protection against Fire") dates to this time.