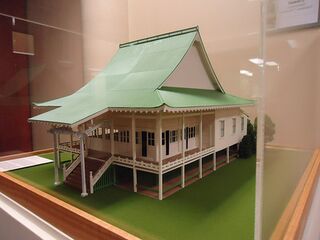 A model of the 1916 Hamakua temple building, on display at East-West Center, Honolulu.

The Hamakua Jôdo temple on the Big Island of Hawaii was the first Buddhist temple established in Hawaii.

It was established in 1896, at the center of five sugar plantations, so as to best serve the Japanese communities on all five plantations. The original one-story temple served not only as worship space, but also as a schoolhouse and residence for the priest.

The temple remains in good condition today, supported by its congregation. There is no longer a priest in residence, but services are still held on a weekly basis with the clergyman from the Hawaii Jôdo temple.