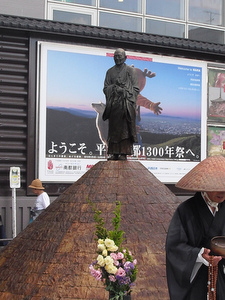 Gyôki was a Japanese monk of Korean (Baekche) descent, and prominently active during the time of the construction of Tôdai-ji. After his death, he was posthumously named a bodhisattva; a statue of Gyôki stands outside Kintetsu Nara Station.

Gyôki was born in the village of Hachida, in Kawachi province. His father was Koshino Saichi, and his mother was Hachida no Konihime, both of whom are said to have been descended from Chinese or Korean immigrants to Japan.

He left his home in 682, at the age of 15, and began studying Buddhism. For the next twenty years or so, he devoted himself to ascetic practice in the wilderness, and to journeying around the region proselytizing. Before long, he had gained a considerable number of followers.

In 717, Gyôki was accused of something by the government. It is thought that the government either opposed his proselytizing, or believed some of his other practices, such as burning one's fingers or writing sutras on human skin, to be heretical. However, no specific punishment was inflicted. He altered his practices, and moved from proselytizing in the streets to focusing himself on efforts within temples. In 723, the sansei isshin law came into effect, encouraging people to bring new land under cultivation, and protecting their wealth or property for a given span of time; in conjunction with this, Gyôki took part in numerous construction projects, building irrigation ditches, bridges, docks, rest stops for travelers, and the like. By this time, Gyôki's followers are said to have numbered roughly one thousand. Records such as the Nihon reii ki indicate that he began to perform miracles, and that passersby began to worship him as a "bodhisattva."

He is credited with overseeing the construction, in the 720s-740s, of five harbors which became the chief Inland Sea ports for travel and shipping.[1]

Gyôki began campaigning for contributions to build the Great Buddha (Daibutsu) for Tôdai-ji, in 743, and two years later was named daisôjô, or "High Priest." He died in 749. Forty-nine temples in the Kansai region have come to be associated with him, and called "the Gyôki 49" (gyôki yonjû-kyû-in).

Gyôki is also considered a founder of Japanese mapping. He produced a number of maps showing the provinces in balloon-like shapes, a style of map which continued to be emulated in Japan for over a thousand years.[2]