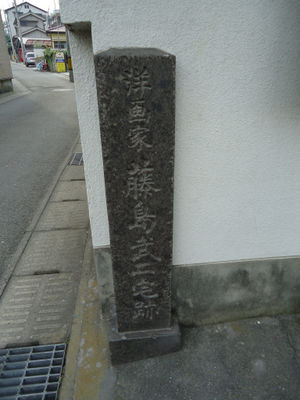 Marker at the former site of Fujishima's home, at Ikenoue 5 in Kagoshima City

Fujishima Takeji was a Meiji period yôga (Western-style oil paintings) artist. He is known for numerous now-famous works, and for teaching a number of other notable artists of the time.

Originally from Kagoshima, he lost his father and two elder brothers during his childhood. While caring for his elderly mother and helping raise his younger siblings, Fujishima began studying Nihonga (traditional Japanese painting) and yôga. He became a painting instructor at the Technical Art School in Tokyo at the age of 29 in 1896.

At age 38, Fujishima traveled to France, where he remained for five years. Upon his return, he was named a full professor at the Technical Art School. In 1937, he was granted the first Cultural Medal.