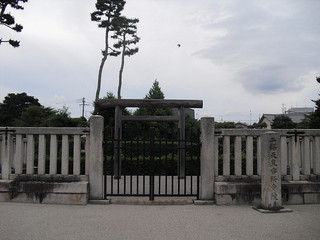 The grave of Emperor Nijô in Kyoto

He saw in his life both the Hôgen and Heiji Rebellions, two major struggles among aristocrat/samurai families jostling for power. In 1156, members of the Fujiwara, Taira, and Minamoto clans fought on each side of the conflict, supporting different heirs for the Imperial Throne.

Nijô ascended to the throne two years later, in 1158, and the following year, 1159, conflict broke out again, except that this time the lines were drawn between clans. Taira no Kiyomori and Minamoto no Yoshitomo, who had fought together in the Hôgen Rebellion against other forces now led the Taira and Minamoto clans against one another. The conflict ended in Taira victory - Kiyomori seized power and became an extremely influential figure at court, while Yoshitomo and several of his sons were killed; his other sons were banished, and would return in the 1180s to lead the Minamoto in the destruction of the Taira.

Nijô lived a short life, coming to the throne at age 15, and dying at age 22. He was succeeded by his son, who took the throne as Emperor Rokujô.