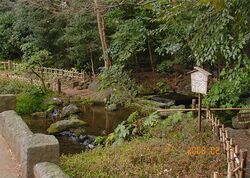 Ochanomizu Spring in Inokashira Park, the source of the Kanda River. It is said Ieyasu often used water from here for tea when he was hawking near here. 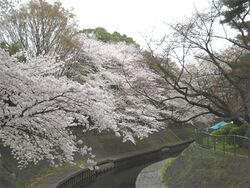 Hamura Weir. The gates on the left take water from the Tama River to the Tamagawa Waterway. 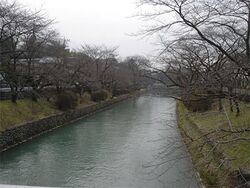 The Tama-gawa Waterway near its source. Shortly, much of the water will be diverted to various areas as part of the Tokyo Water System. 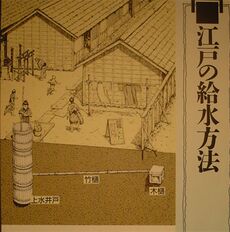 Ordinary people in Edo accessed the water brought through the waterways by wells. The wells were supplied via bamboo pipes leading to wooden underground pipes.

In 1590 Tokugawa Ieyasu was given the Kantô area as his fief, and he entered Edo as his seat in the 8th month. Over the next century a number of waterways (上水 jôsui) were developed. These were to carry water to the city, and were not part of the transportation system. The Koishigawa 小石川 Waterway was started already in 1590. By 1629 the waterway included the water from Inokashira and the Zenpukuji River and was called the Kanda River. In the southwestern part of Edo the Akasaka Tameike was used.

By the time of the mid-Edo period, the population of Edo had grown enormously, especially with the forced residence of the daimyo. In 1652, the bakufu decided to build a waterway to bring water from the Tama River 43 km to Yotsuya,now in Chiyoda ward. The responsibility for the waterway was given to two brothers, Shôemon 庄右衛門and Seiemon 清右衛門. The work was started in 1653 and completed in eight months. As a reward, the brothers were given the surname "Tamagawa 玉川" and a stipend of 200 koku.

Later, waterways were made branching off of the Tamgawa waterway to take water to other places also. (From Hamura to Kodaira the Tamagawa Waterway is still part of the Tokyo Water System. Downstream from Kodaira it is used as a drain for rainwater.)

In Edo an elaborate system of underground pipes was developed to carry water throughout the city. In the "downtown" area one could access the water though neighborhood wells. There were also elaborate water systems within the daimyo mansions.