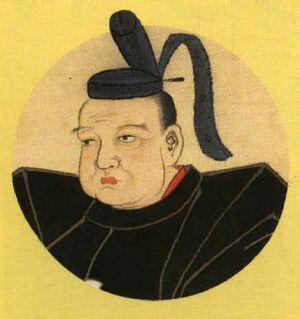 Date Masamune - Although he had lost his right eye to a childhood sickness, he apparently requested that this picture be done with both his eyes intact.

Date Masamune was the eldest son of Date Terumune, a lord of the Rikuzen area of Mutsu. His mother was a daughter of Mogami Yoshimori. Masamune was born in September 1566 at Yonezawa and first went by the name Botenmaru. He received the name Tojirô Masamune in 1578 and the following year was married to the daughter of Tamura Kiyoaki. He went on his first campaign in 1581, helping his father fight the Soma family.

Masamune assumed control of the Date in 1584 with the retirement of his father. Shortly afterwards, he suffered the defection of a Date retainer named Ouchi Sadatsuna to the Ashina of the Aizu region. Masamune declared war on the Ashina in retaliation. However, Masamune's army was halted at Hibara by the Ashina general, Iwashiro Morikuni, and forced to retreat. Three months later, Masamune besieged the Ouchi's stronghold at Otemori and inflicted a terrible price on the traitors, allegedly putting some 800 people of all ages to the sword. When word of this slaughter reached the Ouchi at Obama Castle, they burned Obama and fled. At the same time, tensions between the Date and their traditional rivals the Hatakeyama began to flare. The lord of the Hatakeyama, Yoshitsugu, evidently attempted to make peace with Masamune on a number of occasions, but the latter, young and hot-blooded, rebuffed each advance. Finally, Yoshitsugu turned to Terumune to mediate. The two former rivals sat down and feasted together in a most cordial manner. The following day, Yoshitsugu ostensibly came to thank Terumune for the enjoyable dinner. He then kidnapped Terumune at sword point, an act both unheard of and shocking. When Masamune returned from a morning of falconry to learn of his father's abduction, he called his men to arms and set off after Hatakeyama's entourage. They caught up with Hatakeyama near the Abukuma River. Terumune cried out for Masamune to open fire on them, regardless of his own safety, but his son hesitated. In the confusion, Terumune was cut down and Yoshitsugu somehow escaped to his castle of Nihonmatsu. 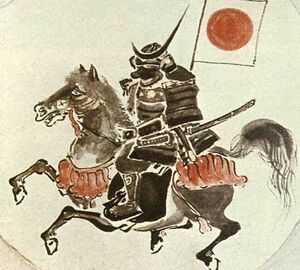 A general war ensued between the Date and Hatakeyama, the Hatakeyama drawing on support from the Satake, Ashina, Soma, and other local clans. The allies marched to within a half-mile of Masamune's Motomiya-jo, assembling some 30,000 troops for the attack. Masamune, having only 7,000 warriors of his own, prepared a defensive strategy, relying on the series of forts that guarded the approaches to Motomiya. The fighting began on the 17th of November, and did not progress well for the Date. Three of his valuable forts were taken, and one of his chief retainers, Moniwa Yoshinao, was killed in a duel with an opposing commander. The attackers pressed towards the Seto River, which was the last obstacle between them and Motomiya. Date attempted to turn them back at the Hitadori Bridge, but was driven back. Masamune brought his remaining forces within Motomiya's walls, and prepared for what would surely be a gallant but futile last stand. But the next morning, no doubt to the amazed relief of the Date warriors, the main enemy contingent picked up and marched away. These were Satake Yoshishige's men, their lord having received word that in his absence the Satomi had attacked his lands in Hitachi. Apparently this left the allies with fewer men than they believed possible to bring down Motomiya, for they too had retreated by the end of the day. This brush with utter defeat was likely a factor in turning Masamune into the renowned general he would one day be known as. In his youth, Masamune had suffered a bout with small pox that caused an infection in his right eye-which he plucked out himself. Combined with his early aggressive and unstable demeanor, Masamune would earn the tag 'One-eyed Dragon'. That nickname would stick, but became one of respect.

In the wake of the battle, peace was struck with the Hatakeyama and Soma, although this was to prove short-lived.

In 1589, Date defeated the Soma, and bribed an important Ashina retainer, Inawashiro Morikuni, over to his side. He then assembled a powerful force and marched straight for the Ashina's headquarters at Kurokawa. The Date and Ashina forces met at Suriagehara on 5 June, and Masamune's forces carried the day, Masamune leading a charge against faltering Ashina ranks, and breaking them. Unfortunately for the Ashina, Date men had destroyed their avenue of escape, a bridge over the Nitsubashi River, and those who did not drown attempting to swim to safety were mercilessly put to the sword. By the battle's end, Masamune could count something like 2,300 enemy heads in one of the more bloody and decisive battles of the Sengoku period to happen in the far north.

This would be Date Masamune's last expansionist adventure, however. With the coming of the next year Hideyoshi besieged the Hojo's Odawara castle. Hideyoshi ordered Date to participate, which he did, though it is said he put off his arrival so that his spies could report on the likely victor. Since the outcome of the siege was obvious, Date presented himself before Hideyoshi and apologized for his lateness. Following the conclusion of the siege, however, Hideyoshi ordered Date to relinquish his newly won holdings in Aizu (perhaps using Date's tardiness as a pretext) and be content with Yonezawa (200,000 koku), a much-reduced income that doubtlessly did not sit so well with Masamune.

In 1592, Date served in Hideyoshi's headquarters at Nagoya on Kyushu during the Korean invasion. Three years later, he found himself implicated in the suspected treason of Toyotomi Hidetsugu and was ordered to pack up and move his household to Iyo on Shikoku, an unthinkable fate (to Date) averted through the good offices of Tokugawa Ieyasu. All in all, it is not surprising that Date readily joined Tokugawa when war came between the latter and Ishida Mitsunari began in 1600. He had already married a son to one of Ieyasu's daughters (an act which in itself had aggravated tensions between Ieyasu and his fellow san-bugyo members) and was likely contemplating how best his remote forces could aid Tokugawa when war began. In the event, he and Mogami Yoshiakira of Dewa held the forces of Uesugi Kagekatsu at bay, with Masamune's first contribution to the war effort being the Siege of Hataya. The battles in the north culminated with Masamune's attack on Fukushima Castle. Date and Mogami's efforts allowed Tokugawa to move west in confidence, and, of course, the campaign culminated in the total victory at Sekigahara in October 1600. In the aftermath, Date's lands were enlarged to 600,000 koku, and he built a new castle town (Aoba-jo) at Sendai.

In 1613 an interesting chain of events unfolded. Masamune, largely lenient towards the Christians in his lands, interceded on the behalf of a certain Father Soteho who had been condemned to death for preaching his faith in Japan in defiance of the anti-Christian edicts. Soteho was released and sent to Sendai, where Date asked if he might arrange for a trade mission to Europe, accompanied by a few Date retainers. Soteho agreed, and Ieyasu reluctantly consented to Masamune's requests for authorization, despite fears that the crafty Date was somehow fishing for European aid in a possible overthrow of the Tokugawa. Masamune dispatched Hasekura Tsunenaga (1571-1622) to head the mission, which returned seven years later. The long-time travelers found that Date had been pressured into initiating a persecution in his territory, and Soteho, arriving at Nagasaki, was once again condemned to death, and this time burned. Though Date's embassy had come to naught, he maintained his status as a first rate general, serving in the Osaka Campaigns (1614,1615). His somewhat unusual and at times controversial manner of doing things was best demonstrated by an incident that occurred during the 1615 siege. Evidently, Masamune became frustrated at the lack of aggression on the part of friendly troops under Jinbo Sukemochi, and ordered his own men to let off a few rifle volleys in their direction to goad them into action. Needless to say, this was not an act well looked upon by his fellow generals.

When Ieyasu was on his deathbed in 1616, Masamune was one of the last of the great daimyo to see him, presenting his overlord with a piece of Zen poetry. Yet, while they were ostensibly on very good terms, Tokugawa (nor anyone else for that matter) never fully trusted the unfathomable lord of Sendai. A number of anecdotes have survived that paint the picture of a lord with an attitude both unreadable and outspoken. In addition, Masamune had a keen appreciation of the arts, despite his rustic background.