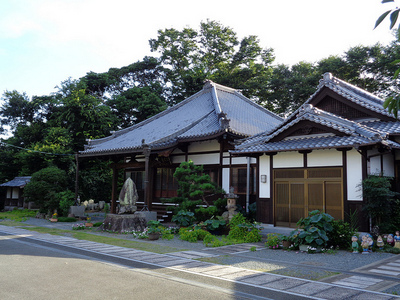 The main hall at Dairin-ji 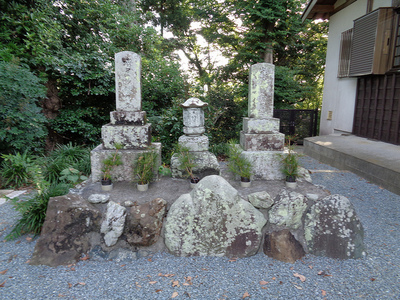 The graves of Magofuku Itsuki and Okon

Dairin-ji is a Jôdo-shû Nishiyama Zen temple in Furuichi, a neighborhood of Ise city.

It is perhaps most famous for its connection to the kabuki play Ise Ondo Koi no Netaba, and to the real-life incident which inspired the play. Magofuku Itsuki, a local doctor who went on a murderous rampage in the Aburaya teahouse nearby on 1796/5/4, is buried at Dairinji along with his lover, the courtesan Okon, in a lover's grave. The temple, located near the former site of the teahouse, is thus a tourist destination for kabuki fans, and professional kabuki actors playing the roles of Itsuki (Mitsugi in the play) and Okon often come here to pay their respects. A small prayer hall called Aizendô ("Love-Stained Hall") once stood in front of the monument to the couple, along with an offerings box, but it was destroyed at some point in a typhoon, and not rebuilt. The path leading from the tomb to the main street is lined with paper lanterns donated by Kamigata (Kansai) kabuki actors. (The temple, incidentally, is mentioned, but does not appear, in the play.)

Records differ on when Dairin-ji was established, with some pointing to 1614, and some 1625. In any case, it is the oldest extant temple in the area. The temple was originally built on a mountain road, but was moved in 1691 down into the town, near to the red-light district, with which it remained strongly associated.

A fire broke out on 1852/6/27 due to the carelessness of a monk, and spread, destroying 280 buildings. The temple was rebuilt four years later, in a new and more elegant form, with raised floors.

The temple was shut down in 1869, and its Buddhist sculptures, altars, and other such sacred objects dispersed to over 160 other temples, in the strong government-backed Meiji era anti-Buddhism movement of the time. A number of other temples in the area also disappeared.

Dairinji was re-established in 1894, and since that time some of the buildings have been moved, other renovated. The Aizendô in front of the lovers' grave was destroyed in a typhoon, but the chief object of worship, a statue of Aizen-Myôô, was recovered and placed in a new hall. The Dairinji Aizen-Myôô was the chief patron deity worshipped as protecting the Furuichi yûkaku, and today continues to be seen as a patron deity or protector of the restaurant and nightlife establishments in the area.