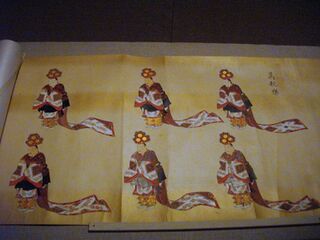 Bugaku is a classical Japanese form of Imperial court dance, closely associated with gagaku court music. It is derived from a combination of Shinto dance and Chinese, Korean, and Southeast Asian influences, and developed into its mature form largely in the 8th-9th centuries.

Like gagaku court music, which is divided into Chinese- and Korean-derived forms (Tôgaku and Komagaku), bugaku is divided into three categories: kuniburi-no-mai (native Japanese dances), Sa-no-mai (dances of the left, derived from those of the Tang Dynasty first introduced in 698), and U-no-mai (dances of the right, derived from those of Korea). The Chinese-style dances typically use red costumes, while the Korean-style ones use green costumes. Performers included both court nobles and hereditary guilds of court entertainers, and bugaku continued through to the modern era.

The Chinese-style dances are typically accompanied by three types of flutes (hichiriki, ryûteki, and shô) and percussion instruments such as the kakko, shôko, and taiko, without string instruments. The Korean-style dances, the shô and ryûteki are replaced by the Korean-style flute (komabue), and the san-no-tsuzumi instead of kakko.