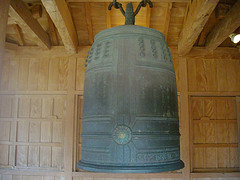 The "Bridge of Nations" Bell, or Bankoku shinryô no kane, is a famous bronze bell associated with the Kingdom of Ryûkyû.

The bell was cast in 1458, during the reign of King Shô Taikyû, and hung at the Seiden (main hall) of Shuri Castle. It was made in Japan by a caster named Fujiwara Kuniyoshi.[1]

Blackened and damaged by Allied bombs and guns in during the 1945 battle of Okinawa, the bell miraculously survived largely intact. It is, however, no longer rung[3].

Nationally designated as an Important Cultural Property in 1978[2], the bell is today in the collection of the Okinawa Prefectural Museum; a full-size replica hangs at the castle site[4]. It remains unclear, however, just where in or around the Seiden it was originally hung[3]. The replica bell currently hangs outside the second bailey or courtyard (Okinawan: shicha nu una), in a structure called the Tomoya, which has been reconstructed based on historical plans, maps, and images, but the original purpose of which is unknown[5].

The bell is quite commonly referred to as the "Bridge of Nations Bell" in English[6][7][8]. This term is derived from a translation of the term typically used in Japanese to refer to the bell: 万国津梁の鐘 (Bankoku shinryô no kane). Bankoku, lit. "10,000 nations," really refers to "all the nations" or "the great many nations." Shinryô literally translates to "a beam across the port/harbor"; thus, "a bridge." Finally, kane refers to a bell of this type and style.

This Japanese name for the bell, in turn, derives from the inscription upon it. Commissioned from the Japanese monk Keiin (渓隠) by King Shô Taikyû, the inscription describes Ryûkyû's prominence in the 14th-16th centuries in maritime trade in the South Seas and prosperous trade relations with China, Korea, Japan, and the various states of Southeast Asia[4].

While it is most commonly known as Bankoku shinryô no kane in Japanese, the official name of the bell is Kyû-Shuri-jô Seiden no Kane (旧首里城正殿鐘, lit. "Former Bell of the Shuri Castle Seiden")[2]. 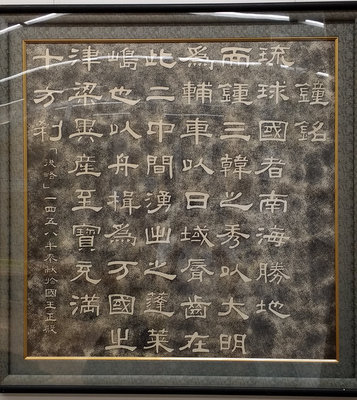 A rubbing of a section of the bell's inscription

A summarized translation of the inscription might be given as follows:

The Kingdom of Ryûkyû is a splendid place in the South Seas, with close intimate relations with the Three Nations of China, Korea, and Japan, between which it is located, and which express much admiration for these islands. Journeying to various countries by ship, the Kingdom forms a bridge between all the nations, filling its land with the precious goods and products of foreign lands; in addition, the hearts of its people emulate the virtuous civilization of Japan and China[9].