Battle of Dan no Ura 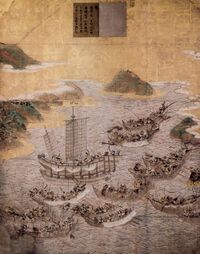 The battle of Dan no Ura, which took place in or quite near the Straits of Shimonoseki, was the culmination of the Gempei War (1180-85) and resulted in the complete destruction of the Taira leadership.

The battle had been essentially forced on the Taira by their loss of Yashima - their base on Shikoku. Pursued by Minamoto no Yoshitsune and isolated by the maneuvers of Minamoto no Noriyori on Honshu and northern Kyushu, the Taira were forced to stand and fight. They were more experienced at naval warfare than the Minamoto, but this was offset to a great extent when a number of local warriors brought ships and seasoned Inland Sea sailors for the Minamoto. Though outnumbered in ships (perhaps 850 to 500), the Taira hoped to use the tides to their advantage. In the event, the tides did flow against the Minamoto initially, allowing the Taira to employ their archers to some effect. In the end, the tide changed and Yoshitsune, aided by the defection of the Taira general Taguchi Shigeyoshi, was able to drive home his attack. The child-emperor Antoku and his wet-nurse Suke no Tsubone committed suicide by drowning, followed by most of the Taira samurai - save their leader, Munemori, who was captured and later executed.

Though most retellings focus on the deaths of the Taira as they leaped into the sea, or as their ships sank, historian Sakamaki Shunzô asserts that since the battle ended shortly before sundown[1], many Taira were likely able to flee under cover of darkness. Further, he cites the paucity of sources indicating any attempt to rescue the young emperor from drowning, and the general vagueness of sources on Antoku's death. Some sources indicate that a Lady Azechi, who held the emperor in her arms as they leapt into the water, was fished out and rescued, as was Taira no Tokuko (Kenreimon-in). Some sources even suggest that it was not the emperor who leapt into the water at all, but a young daughter of the Dainagon Hôjô Tokifusa, or a young son of Taira no Munemori.[2]

It is believed that many Taira warriors who survived the battle scattered all across Japan, many of them settling in isolated places, especially mountain holdouts where they might be safe from the Minamoto, and where Taira-related placenames, such as "Heike-dani" (lit. "Valley of the Taira House") survive today.

Though generally considered rather unlikely, some argue the theory that Taira warriors made their way down into the Ryûkyû Islands, where, as Sakamaki cites, many placenames recall those immediately around Kyoto, and many are written in a man'yôgana form; furthermore, an Okinawan poem from the Omoro sôshi which mentions warriors from Yamato, their armor drenched, landing at sites on Okinawa, is often cited as an indication that Taira did in fact journey to Okinawa at this time. Finally, the surname Taira, albeit written differently (as 平良 instead of 平), is a very common surname in Okinawa today.[3]