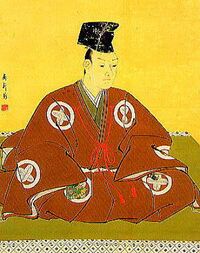 Asano Naganori was a lord of Akô han famous for his attack on Kira Yoshinaka and his subsequent execution, after which a group of his retainers (the 47 Ronin) sought revenge against Kira for provoking him.

Naganori was born in 1667, the eldest son of Asano Nagatomo, lord of Akô. In 1701, he was assigned by the shogunate to oversee the preparation of banquets for imperial envoys arriving in Edo on the occasion of the New Year. Kôke Kira Yoshinaka was assigned to Naganori as an instructor or guide in the pertinent ceremonial protocols. Several months later, on 1701/3/14, Asano famously attacked Kira in the Matsu-no-rôka (Pine Tree Corridor) in the Honmaru Palace of Edo castle, and was sentenced the same day to commit seppuku.

He seems to have been regarded with some distaste by many of his peers, and indeed seen as a hothead. In the Dokai Koshuki, a report prepared by agents of Shogun Tokugawa Tsunayoshi concerning the lives and behavior of daimyo (and prepared long before the assault in the castle), Asano comes off looking like a fop. While the report compliments him on his intelligence and strict punishment of offences within his domain, it derides him for "sexual proligacy". It also notes that he promoted and rewarded retainers based on their ability to procure attractive women for him and to otherwise feed his ego. It notes that he was "only concerned with his personal amusement" and left the government of his domain in the hands of his servants.

The report calls his retainers (Oishi Kuranosuke being the prime target) to task for the poor job they had done and brands them as disloyal for not having trained Asano properly. Asano is noted for possessing neither literary nor military skills. It appears that the chief retainers of the Asano feared losing their positions of authority within the clan and did their best to ensure Asano occupied himself primarily by indulging his libido (leaving the direct control of the clan to them).

The Dokai Koshuki is far from the only document showing Asano and his retainers in a poor light. A scholar and contemporary of Asano, Sato Naokata, notes that attacking a man (Kira Yoshinaka) engaged in discussion from behind and not succeeding in killing him showed ‘neither courage nor ability’. Further, in an amusing sidenote, he states if Asano had wanted to kill Kira, he should have done so after the completetion of official duties. A popular street song circulating after the attack on Kira in the Shogun’s castle also mocked Asano for his lack of sword skills (a lack of skill which seemed to also apply to his retainers). Asano’s assault was seen by the bakufu and Shogun not as a quarrel between samurai (where both would be punished) but as unilateral misconduct on his part. This is borne out by Asano's treatment after the assault-he was escorted out of Edo Castle through an ‘impure’ exit reserved for corpses and criminals and was further shown contempt by having to commit seppuku in a garden rather than in the grand chamber appropriate to his status as a daimyo. 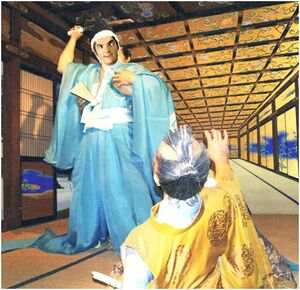 Asano knew well the penalties for "spilling blood on a ritual occasion" -his own uncle, Naito Izumi no Kami Tadakatsu was relieved of his life and domain when he killed another daimyo on temple grounds during the funeral rites for the fourth Shogun, also shouting out that the assault was revenge for an earlier insult. It seems this type of irrational, selfish behavior ran in the family. Asano also saw the results of this type of behavior on family members and retainers when he acted as the bakufu’s agent when confiscating a fief (Matsuyama castle in Bitchu) a few years earlier. Obviously, Asano gave no thought to the repercussions of his actions when assaulting Kira.

Overall, the picture drawn of Asano is that of a man who enjoyed his postion of prestige and wealth and was used to getting his way in all matters and indulging his every whim. In this he was not all that different from many of his elite peers, but when combined with a lack of training and self control became deadly. His cowardly attack on Kira (who in all likelihood had only chastised him for his lack of attention in learning Shogunal protocol-Asano's tendency to be completely disinterested in this sort of thing was well established) showed that he was impulsive and rash, not giving one thought to the consequences of his act to his retainers or subjects. In 'Seppuku', Andrew Rankin explains that the Ako Ronin's assault was not based on feelings of loyalty towards Asano: “...the Ako men were not driven by personal devotion (to Asano). Some of them had never spoken a word to Lord Asano…Their loyalty was not to Asano personally, but to the warrior code….If the incident reveals anything timelessly Japanese, it is this heavy emphasis on the need to save face, a need defined by the status of the men as samurai, rather than on their moral obligations as individuals”.