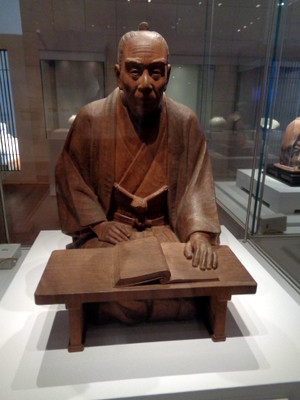 Aizawa Seishisai, also known as Yasushi, was a scholar of the Mito school and advisor to Tokugawa Nariaki, lord of Mito han. He is most known for his book Shinron ("New Theses"), first published in 1848, which articulated many ideas later taken up by the jôi ("expel the barbarians") movement.

After an English whaling vessel became shipwrecked on the coast of Mito domain in 1824, Seishisai was sent by Mito daimyô Tokugawa Narinaga to interview the men. Not trusting their explanation that they were simply there for whaling, Seishisai became concerned about Westerners' militarist or expansionist designs upon Japan, and began drafting a lengthy memorial to his lord on the subject. This text, begun in 1825[1] and addressed to Narinaga's successor, Tokugawa Nariaki, was later published in 1848 under the title Shinron ("New Theses").

In that text, Seishisai writes of Japan's place as the Divine Realm from which "the sun emerges," as "the source of the primordial vital force sustaining all life and order," and as "the head and shoulders of the world ... illuminat[ing] the entire universe." He makes reference to the divine lineage of emperors as unbroken and as descended from Amaterasu, the Sun Goddess. Seishisai also writes of the Western powers as "loathsome ... barbarians, unmindful of their base position as the lower extremities of the world." He writes that the Westerners use trade in order to learn of the geography, defenses, and conditions otherwise of a place, so that they can better plan for an invasion; in the case of stronger countries, he asserts, they use the propagation of Christianity as a means for subverting and thus weakening the country prior to an invasion. He points in particular to the Russians, who at that time had been expanding their influence among the Ainu and conquering or settling numerous northern islands, and points as well to the English, whose ships had begun to appear near Japanese shores more and more frequently.

Though Aizawa's intention with the Shinron was seemingly to inspire reforms within the Tokugawa shogunate, many in the sonnô jôi movement employed his arguments in their efforts to overthrow the shogunate entirely.