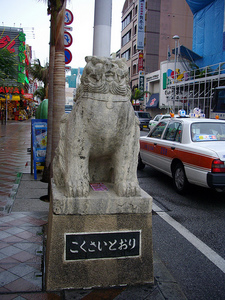 One of a pair of shisa which guard the entrance to Kokusai-dôri, one of the most major avenues in the Okinawan capital city, Naha.

The shisa is the Okinawan version of the lion-dog creature known as shishi in Japan, and seen as well, with variations, throughout China and Korea. Most often made of stone or clay (ceramic), shisa statues come in a wide variety of sizes, and are protective figures. They are most often placed flanking a gate or entrance, whether it be the grand entrance of a castle, or the humble gate to a personal home; since the Meiji period, they have come to be placed, as well, increasingly, on rooftops.

The paired shisa are generally said to be one male, and one female; like the Niô guardians often seen at Buddhist temples, often one of the pair of shisa will have its mouth open, pronouncing the Sanskrit 'a', while the other has its mouth closed, pronouncing 'un'. These sounds combined form "om" or "aum," a Sanskrit syllable meant to represent the creation, existence, and destruction of the universe, the cycle of all things.

The idea of the lion or lion-dog as a protective entity is believed to have entered China from the west around the 2nd century BCE. It was then introduced into Ryûkyû around the 14th or 15th century CE.[1] Explanations for what it is shisa protect a house or other location from vary, but include protection from fire, and from bad spirits.

Shisa are today a very popular Okinawan souvenir, and symbol of Okinawa. The shisa also appears in a distinctly Okinawan form, as different from Japanese lions, in Okinawan versions of the lion dance (shishimai).