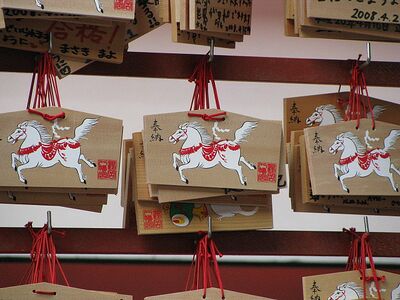 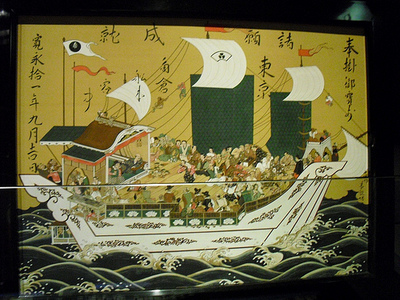 A replica of an ema commissioned by the Sueyoshi family for Kiyomizu-dera, in order to pray for a safe shuinsen journey to Tonking in 1633/11. Replica and original, collection of the Museum of Kyoto.

Ema (lit. "picture horse") are wooden votive plaques commonly sold at Shinto shrines; the shrinegoer typically inscribes a wish or prayer onto the plaque and hangs it up at the shrine, where it can be visible to the kami of the shrine.

Though today typically about the size of a postcard (though a centimeter or more thick), and mass-produced, ema were traditionally hand-painted, and could be quite large. Ema several meters on a side were purchased in the late 16th or early 17th century to pray for the safe journeys of merchant ships traveling to and from Southeast Asia.[1]

Ema originated as paintings of horses commissioned in the place of making offerings of actual horses to the gods. For this reason, it is most traditional for ema to bear pictures of horses; however, it is also quite common today to see plaques with a variety of other images, including occasionally depicted in an anime style, albeit usually depicting something of some relevance to the shrine, e.g. images of foxes for an Inari shrine.

At most shrines, ema are hung on freestanding racks, or on the sides of a shrine building. However, at many shrines, an ema-dô ("Ema Hall") houses the plaques purchased by devotees.