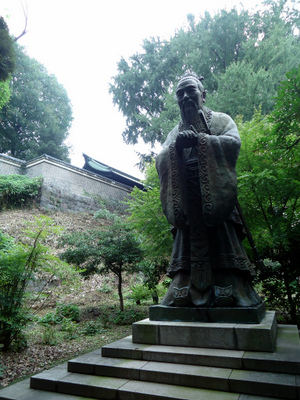 The world's largest statue of Confucius, at Tokyo's Yushima seidô.

Confucianism is a range of philosophies which trace their origin to the teachings of Confucius, who lived in China in the 6th-5th centuries BCE. Though originally based in the Analects of Confucius (C: Lún Yǔ, J: Rongo), which purport to be a record of the teachings of Confucius himself, "Confucianism" evolved over the centuries, absorbing elements from other philosophies, and developing into a number of strains of Neo-Confucianism, the most prominent of which developed in the Song Dynasty, articulated by scholars including Zhu Xi, in the Ming Dynasty under Wang Yangming and others, and in Tokugawa Period Japan, represented by scholars such as Arai Hakuseki and Hayashi Razan.

Adopted by the Imperial Court of the Han Dynasty as the chief political philosophy of the state, Confucianism remained the foundation of Chinese, Korean, Japanese, Vietnamese, and Ryukyuan political philosophy, or at least profoundly influential, in one form or another, throughout the Current Era (i.e. the last two thousand years). In China, Korea, and Ryûkyû in particular, a Confucian scholar-bureaucracy formed the core of political administration, with elites studying the Confucian Classics in order to be selected for official posts in government service. The political beliefs of various strains of Confucianism were profoundly influential in Japan as well.

However, the character of the figures commonly described in English as "Confucian scholars" in fact developed out of a combination of philosophies and other cultural elements and influences, including Taoism and Buddhism. The disconnect between this tradition and the core, original, Confucian philosophy is evident in the fact that the standard Japanese terms for "Confucianism" do not incorporate the name Confucius (孔子) itself, but rather employ the term ju (C: rú). The most common Japanese term for "Confucianism" is thus not Kôshigaku (孔子学), "the teachings of Confucius," but rather jugaku (儒学, "the study of rú"), jukyô (儒教, "the teachings of rú"), or judô (儒道, "the way of rú)[1]. Ju, or rú in Chinese, literally meaning "gentle," was used as early as Confucius' own time to refer to his followers, and has come to refer to the broad set of concepts associated with this tradition of the refined "Confucian" gentleman, and the various teachings such a gentleman-scholar is said to follow and espouse. Some historians have also pointed out that in the Han Dynasty, the classical canon was not yet set, and rú included a wide range of classical works which did not between them present a coherent attitude or worldview.[2]

In addition to the core values of rén, yì, and xiào which every Confucian gentleman should epitomize, Confucius also emphasized the concept of lǐ (礼, J: rei), meaning proper ritual behavior or decorum. To live in accordance with Confucianism meant observing correct etiquette, and doing so with the correct mindset or emotion behind it.

The correct performance of proper decorum also extends into behaving properly according to one's role, or place, and properly according to hierarchical relationships with others. Thus, another of the key concepts expressed in the Analects is that of the five relationships: ruler and subject, father and son, husband and wife, older and younger brother, and between friends. All other relationships were taken to be modeled on one of these. Four of the five relationships are unequal, and hierarchical, but all are reciprocal: the ruler has obligations to his subjects, just as they have to him; the father has obligations to his sons, and the husband to his wife. These ideals also meant that rulers, peasants, artisans, merchants, and so forth each had their requisite roles to play in society, and that high or low one should perform one's role correctly and to the fullest, in order for all of society to function harmoniously and prosperously.

Human beings are considered to be fundamentally good in Confucianism, a "heavenly principle" (C: tiānlǐ) possessed by all people since birth. However, while the cosmic principle lǐ is eternal, perfect, and incorruptible, the "material nature" of human beings, the qi from which our bodies are composed, can become imbalanced or turbid, thus causing anger, violence, and other negative emotions and behavior. Confucius taught that one must continually aspire (立志, C: lìzhì, J: risshi) towards becoming a better person, and must actively work to pursue that goal, through personal cultivation (修養, C: xiūyǎng, J: shûyô) and study (学問, C: xuéwèn, J: gakumon).[3]

Zhu Xi articulated two key ways of pursuing personal cultivation, study, and the effort of being a proper gentleman: Jūjìng (居敬, J: kyokei, "abiding in reverence"), and géwù zhìzhī (格物致知, J: kakubutsu chichi, "extending knowledge through the investigation of things"). Jūjìng, or "abiding in reverence," refers to a concept of self-control. It advocates that one should be constantly conscious of the state of one's mind, that it be clear of distractions and dominated by a quiet composure, and further that one should similarly ensure that one's body - clothing, manner of movement, manner of interacting with others, etc. - is similarly composed and dignified. Zhu Xi advises "quiet sitting" (靜坐, C: jìngzuò, J: seiza[4]) as a means of clearing the mind. As for géwù zhìzhī, or "the investigation of things," this refers to a notion of seeking to understand things (especially their underlying principles, or lǐ) as well as possible, with the intention being that proper understanding will allow one to more fully, more correctly, work to rectify oneself and all other things in one's life. In elucidating this idea, Zhu Xi drew upon a quote from The Great Learning (Dà xué) which says essentially that, and tied it in to a concept from the I Ching known as qiónglǐ (窮理, “plumbing of principle”).[5] Essentially, Zhu Xi advocates that the core of self-cultivation is the application of one's intelligence and the expansion of one's knowledge to the greatest extent possible. Since all things follow the same universal principle (lǐ),[6], to understand the outside world is to understand oneself, and to work towards achieving a self-realization of one's place and purpose in the world. Eighteenth-century shogunal advisor Arai Hakuseki was a particularly avid advocate of this expansion of knowledge through the investigation of things, and questioned numerous traditions and ritual protocols in order to suggest revisions or reforms he felt were more in keeping with logic and Neo-Confucian ideology.[7]

Since the May Fourth Movement of 1919, Confucianism (along with a misguided application of the term "feudalism") has for many in China become a catch-all for undesirable and oppressive practices of the past. Political leaders of the time denounced Confucianism as the ideology enforcing and enabling the conservative and patriarchal oppression of the Chinese people, and especially of Chinese women. Mao Zedong claimed he would work to free women from their subordinate position under Confucianism, and state ideology in Communist China since then has, nominally, claimed full and complete gender equality among its ideals.[9]

While nearly all pre-modern (and modern) cultures around the world were (are) heavily patriarchal in their various ways, and Confucianism is certainly no exception, many have also pointed out that many of the quotes often cited as proof of Confucianism's patriarchal nature are taken out of context, or have been misinterpreted. Besides, even if traditional culture was discriminatory towards women, some argue, still Confucianism is not fundamentally an ideology of oppression, and it can be reinterpreted, reappraised, recovered to still have great value for today.[9]

Confucianism entered Japan during the Nara period, if not earlier, as the Japanese state incorporated Chinese governmental technologies & philosophies. The Neo-Confucianism of Zhu Xi and others was introduced to Japan by Zen monks in the Kamakura period.[10]

Confucianism (K: yugyo) and a writing system based on the Chinese language were already in use in the Korean Three Kingdoms by the 4th century. Some scholars believe that both may have been introduced as early as the 2nd century BCE.[12]

King Sosurim of Koguryo established a National Confucian Academy (太学, K: taehak) in 372, and several centuries later, King Gwangjong of Goryeo (r. 925-975) established a system of Confucian examinations for selecting scholar-officials to be appointed to government posts.[12] Buddhism remained dominant, however, over Confucianism in Korea for over a thousand years, with Confucianism only first becoming dominant in the 15th century. At that time, the Joseon Court adopted Neo-Confucianism (K: seongrihak) in the vein of Zhu Xi (K: Joo Hui) as the chief guiding political philosophy of the court.[12] Some scholars argue that the Confucianization of Korean society was not complete until the 17th century, and the 17th-18th centuries saw considerable ritual controversies.[13]

Han Chinese settlers and others who sojourned or settled in Taiwan brought their Confucianism-informed upbringings with them, making it difficult to say just when it was that Confucianism was first introduced to Taiwan.

However, the immediate successors of Zheng Chenggong may have been the first to establish a Confucian temple on the island, doing so in the 1660s. At its center was a structure known as the Dacheng Hall (大成殿, J: Taiseiden), much like comparable Confucian temples in, for example, Naha and Edo. Though the earliest surviving records of certain major Confucian ceremonies being performed there date back only to 1696, it's believed that such ceremonies may have been performed regularly since the establishment of the temple several decades earlier.[14]

Following the retreat of the Republic of China government to Taiwan in 1949, it took active steps to encourage and promote Confucian practices as a means of showing opposition to the Communist regime in mainland China which brutally suppressed or corrupted traditional culture, religion, and anything which might be seen as "superstition." A Confucius Ritual Committee was established by the Taiwanese (ROC) government in 1968 to oversee and enact these major Confucian ceremonies.[15]