A battle in the Genpei War.

After the Heike were defeated in the Battle of Ichi no Tani in the 2nd month of 1184, they, under Taira Munemori, entrenched themselves at Yashima, a large island just off Takamatsu on the north coast of Shikoku. (Yashima has since become a peninsula.) However, a year later Minamoto Yoshitsune made a surprise landing on the east coast of Shikoku (Awa province), marched to Takamatsu and attacked Yashima. The Heike were driven from the Inland Sea. For a detailed account, see the article on the Gempei War. The final battle of the war, Battle of Dan no Ura, was fought one month later (3/24).

This battle is the scene of several famous stories from the Heike Monogatari, such as Nasu no Yoichi's (那須 与一) shooting a fan from afar and Yoshitsune's determined efforts to recover a bow dropped in the sea. 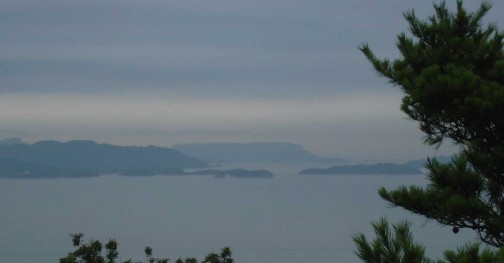 Yashima, the flat-topped land in the center, seen from the NE

This article is a rough draft which is in need of cleanup (grammar, spelling, corrections, links, formatting, etc.). You can help SamuraiWiki by editing it. Click here for a list of articles that have been tagged as a draft copy.

This article is a placeholder or stub. You can help SamuraiWiki by expanding it.
Retrieved from "http://samurai-archives.com/w/index.php?title=Battle_of_Yashima&oldid=19012"
Categories: