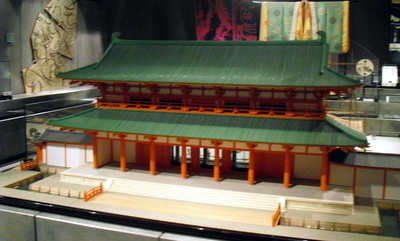 Model of the Rajômon at the Kyoto Bunka Hakubutsukan.

The Rajômon or Rashômon was one of the main city gates at the entrance to Heian-kyô (ancient Kyoto). Perhaps most famous for the Akira Kurosawa film Rashômon which is set there, the gate also features in a Noh play by the same name.

The gate faced Kujô-dôri (Ninth Avenue), and was flanked by the two temples of Tôji and Saiji. Suzaku-dôri (Suzaku Avenue), the chief boulevard of the capital, stretched north from this gate to the gates of the imperial palace. It is believed to have been 50 meters wide, 24 meters high, and 21 meters deep.

The gate was destroyed in a typhoon in 816 and was rebuilt, but was later destroyed again in another storm. After that, it was never rebuilt. A model was erected near Kyoto Station in 1994, however.