From SamuraiWiki
(Redirected from Negoro-ji)
Jump to navigationJump to search 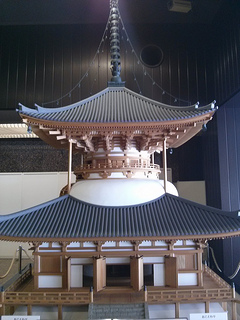 A 1/10th scale model of Negoro-dera's tahôtô, on display at the National Museum of Japanese History

Negoro-dera is a major Shingon Buddhist temple, located in the city of Iwade, in Wakayama prefecture.

The temple traces its origins to 1130, when the monk Kakuban established a temple called Denhô-in on Mt. Kôya. This temple was later moved to Hôfuku-ji in Negoro. The monk Raiyu relocated the temple Daiden-hôin to the Negoro site in 1288, reestablishing the entire site as the head temple of the Shingi school of Shingon, and renaming it Negoro-dera.

During the Sengoku period, the temple became a center of warrior monk and ikki (lay religious mobs) activity. Toyotomi Hideyoshi besieged and destroyed the temple in 1585, but it was later rebuilt with the help of the Kishû Tokugawa.

The temple's tahôtô ("treasure tower", a style of two-story pagoda), originally begun in 1481 and completed in 1547, is today considered a model example of the tahôtô form, and has been designated a National Treasure. It is 35.9 meters tall, and was designed in emulation of the Konpon-daitô tower built by Kûkai on Mt. Kôya. The structure is five ma wide, with each ma (the space between pillars) being 14.9 meters. Within that square of the ground floor stands a circle of pillars, topped by a pent (false) roof, above which rises the upper sections of the tower.