From SamuraiWiki
(Redirected from Mongol Invasions)
Jump to navigationJump to search 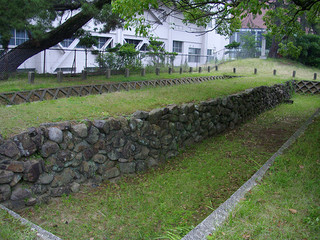 Extant section of walls constructed at Hakata Bay as part of defenses against the Mongols.

The Mongol Empire invaded and sought to conquer Japan in 1274 and again in 1281. Both attempts ultimately failed, and represent the closest Japan has ever come to being invaded and conquered since prior to the Nara period. The battles involved a coordination of samurai forces from much of the archipelago, representing a degree of early national identity, unity, and organization. These continue today to be considered among the most important military events in Japanese history, and are significant in the larger global view as well, representing a check to Mongol expansion.

Envoys of Kublai Khan delivered a formal message from the Khan to the shogunate's regional Kyushu headquarters in Dazaifu in 1268, commanding Japan to submit or be invaded; the missive was passed on to Kamakura and Kyoto, but was ultimately ignored. Following the reception of another message to the same effect in 1271, the Kamakura shogunate ordered Dazaifu, along with all the shugo and jitô, to begin strengthening defenses. Samurai from Kyushu who were residing in Kamakura were returned to the island, and a number of the shogun's own direct retainers (kenin) began journeying towards Kyushu as well, along with a sizeable army.

A Mongol ambassador arrived in Dazaifu in late 1272, and was rejected and expelled on the orders of the shogunate. The Mongol fleet arrived soon afterwards, seizing Tsushima and Ikishima with little difficulty; a detachment was sent to take the port of Hirado, while the bulk of the fleet landed at Hakata, on the north shore of Kyushu, a short distance from Dazaifu, on the 19th day of the 10th month of Bun'ei 11 (1274). Messengers were immediately sent out, sounding the alarm of the invasion, and the gathered forces across Kyushu moved towards the port city. Pontoons were laid across the Chikugo River to allow forces from the southern provinces of the island to travel more quickly.

The conflict which followed is known as the "Battle of Bun'ei" (文永の役, Bun'ei no eki) as it took place during the Imperial era of Bun'ei. It is also commonly known in English as the "First Battle of Hakata Bay".

Dazai Shôni Tsunetsugu, head of the Dazaifu government, commanded the entire Japanese force, while Shimazu Hisatsune of Satsuma province oversaw the defense of the bay. George Sansom reports that the invasion force consisted of roughly 300 large vessels and 400-500 smaller craft, carrying 15,000 Mongol and Chinese troops, plus 8,000 Koreans and an advance force, along with 7,000 Korean and Chinese sailors, though these numbers, along with those on the Japanese side, remain a subject of intense debate among scholars.

The invasion began in earnest around dawn the following day, the 20th day of the 10th month. The Mongol forces, with support from their ships, entered the town of Hakata and were engaged by the samurai army. The Mongols had a distinct advantage over the Japanese, having more extensive combat experience, a variety of highly effective long-range weapons, and better tactical and strategic organization. Unlike the samurai who were used to single combat, most of whom had not seen a conflict of this scale within their lifetimes, the Mongols had extensive experience fighting in large groups. Though the samurai were likely as skilled and experienced with the Japanese bow as with the sword, their enemy had a technological advantage in this field as well, wielding crossbows, the now-famous Mongol recurved composite bow which was a crucial element of their victories across mainland Asia, and various other missile weapons, making use of incendiary and more conventional projectiles.

The Japanese forces fought a losing battle until nightfall, and retreated to a series of earthwork fortifications at Mizuki, a few miles inland, for the night. Reinforcements were on their way from Honshu, and if the Kyushu forces could hold off the Mongols long enough, though they would suffer extensive casualties, in the end the reinforcements would be able to overwhelm the invaders by pure strength of numbers. This scenario, however, did not play out.

That night, a storm struck, and after setting the town of Hakata aflame, the Mongol warriors retreated to their ships, and withdrew, calling off the invasion. Many Mongol ships were lost in the storm, up to 200 according to some sources; Korean records indicate that 13,000 died in the invasion, many of whom it can be assumed died in the storm.

In the aftermath of the first invasion, efforts were made to shore up defenses on the western and northern coasts of Kyushu, both in terms of expanding and strengthening earthwork and stone fortifications and in terms of increasing the number of warriors in each garrison. Fortifications were established at Hakata, and the punishments for avoiding military service were made more severe.

The shogunate devoted much attention and efforts to these defenses, excusing its retainers in that portion of the archipelago from local garrison duty as part of the Ôban, and adopting policies of frugality for both the shogunate and Imperial Court, in order to make more funds available for the defensive efforts.

The notion of switching from the defensive to the offensive, attacking Mongol bases and ships, was considered as well, a great amount of forces having been assembled in and around Hakata. It was eventually decided that the gathered forces, and the various funds and resources backing them, could not support both offensive and defensive strategies, and attentions were focused once more on fortifications, coastal ships and other defenses.

Another missive arrived from the Khan, threatening a new invasion and demanding that the "King of Japan" submit to Mongol suzerainty and present himself at Beijing. The messengers were brought to Kamakura and executed.

Meanwhile, Kublai Khan made preparations for a second invasion, which was ultimately delayed until 1281, for a variety of reasons. Mongol forces were occupied during this time in subjugation of Song Dynasty China which did not fully fall to the Mongols until 1279. In addition, Korea had been devastated by poor harvests, and by a relative lack of able-bodied men to serve as farmers and workers, as so many had been lost in the previous invasion attempt.

The Khan ordered the King of Korea, in 1279, to begin assembling a fleet of 1,000 ships and an army of 20,000 men[1]; this would be in addition to an army of 100,000 Chinese and Mongol troops. Seeking to gain a better position under the Khan, the King of Korea replied with a proposal of his own, detailing the number of ships, troops, and provisions he would provide; 15,000 Korean seamen would crew 300 ships, another 600 ships being provided for Mongol/Chinese crews, carrying 10,000 Korean troops.

In the end, the Khan formally declared the order to attack on the twelfth day of the final month of Kôan 3 (January 1281), having established two fleets, one of 40,000 Mongol, Korean, and Chinese troops and one of 100,000 Chinese troops, which would join in the attack on Japan by beginning with Ikishima.

The larger Chinese fleet was delayed for some months, possibly simply by the difficulties of organizing such a large force. The Korean force, meanwhile, attacked Tsushima in the spring and were driven back, suffering many losses from disease at their base, and not setting out to sea again until summer, when it was reported that the Chinese fleet was approaching the rendezvous point, Ikishima. Rather than waiting for the larger force, the Korean fleet seized Iki on Kôan 4/5/22, making landings at several places on Kyushu's northern coast on 6/6.

One of the points seized by the invaders in the landings was the Shiga spit, a point just beyond the east end of the Japanese stone coastal wall, making that particular Korean/Mongol contingent the immediate priority and focus of attention of a considerable number of Japanese troops. Aware of the manner in which the Japanese had focused their defenses on this coastal wall, the second invasion force landed some distance west of the wall, seizing the port of Hirado, and then moving to attack the western end of the wall.

The Japanese defenses held out well for over seven weeks, the small coastal boats taking out a number of the invaders' ships, and the ground troops along the wall rallying occasional counterattacks, and rushing to remedy weak points in the defenses. According to Sansom, the invaders never gained the upper hand, and it is reasonable to assume that the thousands of Chinese troops who had been subjugated only years before by the Mongols would not have been particularly loyal to their new masters, and thus not particularly fervent in fighting.

Typhoons, now famous as the Kamikaze or "divine wind", struck the region on the last day of the 7th month, into the first day of the following leap month (閏七月), driving the invading force to flee. It is generally accepted that the Korean fleet, based to the north of Kyushu, managed to set to sea, moving their ships away from the shore, before the storm peaked, though it is estimated that roughly 1/3 of the fleet was nevertheless lost before reaching harbor in Korea. The Chinese fleet was not so lucky, being based to the southwest of the island, where the storm hit hardest. Though Sansom indicates that it is impossible to judge, based on the primary sources, just how many ships were involved in the invasion, and how many were lost, it can be safely assumed that a very considerable portion of the roughly 100,000 men in this contingent were killed in the invasion or in the storm.

Kublai Khan afterwards indicated desires to prepare for a third invasion, but ultimately became too involved in conflicts and affairs on the mainland, his forces insufficient to support a third attempt in any case. The shogunate, likewise, having expended much funds and efforts in resisting the invasion, turned towards domestic affairs.