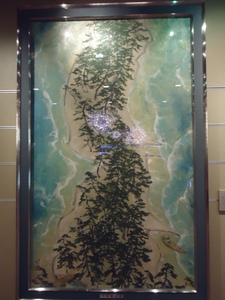 Originally from Wakayama prefecture, his childhood name was Shôtarô. He began his artistic career as a yôga painter (painting in oils, in a Western style), and participated in the Hakubakai (White Horse Society). After traveling in Europe & the US around 1913-14, where he viewed some of the greatest Japanese art treasures in Western collections, Ryûshi turned to Nihonga (painting in traditional Japanese media). The following year, he joined a number of other artists in forming the Sangokai (Coral Group). Ryûshi came to be quite prominent and celebrated in artistic circles, and was awarded the Order of Culture.

In 1934, he traveled to Japanese-controlled Micronesia, writing about his experiences and painting South Seas scenes in Palau and Yap.