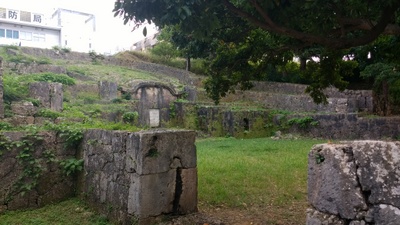 The Izena dunchi tomb is a large Okinawan tomb in the Shintoshin area of Naha, Okinawa. The family tomb of the sôjitô (administrators) of Izena and Iheya Islands, it is one of a group of tombs officially recognized by the national government as an Important Cultural Property. It is believed to date to the 18th century.

The tomb is one of the largest "tortoise-shell tombs" (O: kaami kuu nu baka) in Okinawa prefecture, covering some 660 square meters. It was dug into the side of a hill, and is surrounded with low stone walls on three sides, forming a small yard in front of the tomb. These walls are built in the aikata-zumi mode, and include two openings that provide access into the courtyard (one main entrance, and one smaller side entrance). A small hole in the ground on the left side of the courtyard, covered over in stones, was used to dispose of tools and other items used in funerary practices. A small shrine to a local deity is located on the right side of the courtyard.