In the pre-modern and early modern periods, portraits of the Emperor were only painted posthumously, were only used for memorial purposes and the like, and were only visible to those few who (by virtue of lineage, position, or rank) would have had access to the emperor in life. However, in the Meiji period through the early 1940s, images of the emperor were widely distributed throughout society, perhaps most famously in being posted in public school classrooms, and formed a central element of an Emperor-centered national(ist) ideology. In the post-war period, the emperor has been more visible in a variety of ways, being seen in photographs and video in news media and elsewhere.

In the medieval period, emperors were typically depicted with beard and mustache, as symbols of masculinity. The last pre-modern monarch to be depicted in this way, however, was Emperor Go-Yôzei (r. 1589-1611), and in the Edo period, maintaining a clean-shaven face became a relatively standard element of tidy appearances for men of all ranks of society (from the emperor down to the villagers).[1] 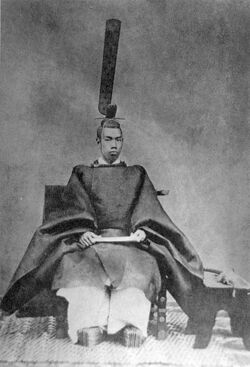 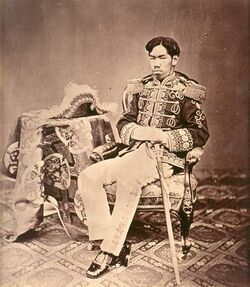 The second of Uchida Kuichi's official photographs of the Emperor; taken in 1873, this was one of the last photographs the Emperor ever officially sat for. 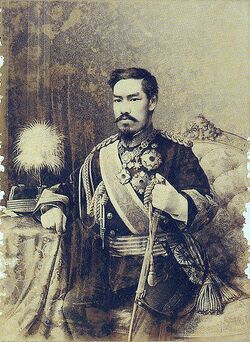 Perhaps one of the most famous or familiar images of the Meiji Emperor, this go-shin'ei (御真影) of which copies were distributed throughout the country, is not a photograph of the emperor directly, but rather of an 1888 drawing by Edoardo Chiossone.

The last official photographs of the Meiji Emperor were taken in 1872 and 1873, by Uchida Kuichi; after that, the Emperor is said to have refused to have his picture taken (or, otherwise, the Imperial Household Ministry or other governmental managers of Imperial & national ideology and propaganda had it no longer take place). For this reason, many of the most famous or well-known images of the Meiji Emperor today, though perhaps widely mistakenly believed to be photographs, are in fact drawings. One such portrait was sketched by Edoardo Chiossone in 1888. The yôga painter Takahashi Yuichi was also able to paint a portrait of the emperor, in 1880.[2]

These photographs and drawings show an evolution in how the emperor was presented to the people, and to foreign audiences. Uchida's first photo portrait of the emperor, taken in 1872, shows him in classical court dress (sokutai), as he dressed up until 1871, and in certain private contexts after that, in particular when performing sacred rites at the Palace Sanctuary. That he continued to dress in this manner for those ceremonies was reported in the newspapers and other media, perpetuating ideas of his connection to Japan's illustrious tradition, and to his Imperial ancestors. Uchida's second photo portrait, however, taken the following year, shows how the Meiji Emperor would have appeared in nearly all of his public appearances (e.g. in processions and parades): in Western-style military dress uniform, as a masculine and modern ruler of equal (if not greater) stature to any European monarch.[3]

The Ministry of Education began to send images of the Meiji Emperor to public schools across the country in the 1880s, and it's believed that by 1897 or so, there was one in every elementary school across Japan. The official documents accompanying these portraits used terminology normally associated with the actual presence of the emperor, including terms such as "departure of the imperial conveyance" (gohatsuren) as the images left Tokyo, and "arrival of the Emperor" (chakugyo), as they were received at schools.[4] These images were photograph copies of the third image seen here, of an 1888 drawing by Edoardo Chiossone based on his own sketches. While a photograph could be posed and staged in various ways, it was still limited, portraying the emperor as he truly was in that moment; some descriptions of Uchida's second photo portrait describe the emperor as slouching in the chair, and as grasping the saber weakly. Similarly, Ernest Satow, upon meeting the emperor in 1868, described him as having a noticeably protruding chin. Chiossone, however, in his drawing, had the power to depict the Meiji Emperor as desired, strong, assured, and with every single bit of the image, every fold of cloth, every hair, precisely where the artist wished it to be. It was thus this image, of a strong and mature monarch, which became the most widely reproduced and distributed one.[3]