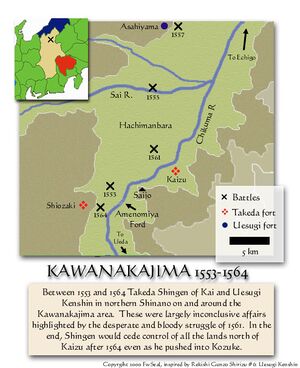 The second contest between Takeda Shingen and Uesugi Kenshin occured in the Fall of 1555 and largely consisted of skirmishes as the two warlords vied for a superior position. For over a month, the Takeda and Uesugi glared at one another from across the Saigawa and in the end retreated without having fought a decisive encounter. The fiercest fighting happened towards the beginning of the campaign, when Kenshin attempted unsuccessfully to reduce Asahiyama. Shingen had supplied the fort's commander, Kurita Kakuju, with some 300 guns prior to the battle and these tipped the balance in the defenders' favor.