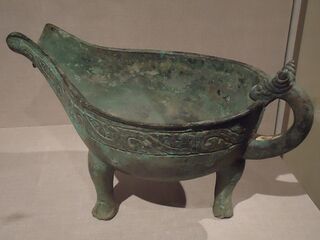 The Zhou Dynasty, which followed the Shang Dynasty, was the third of China's legendary Three Dynasties. Though little historical evidence providing information about the dynasty survives, according to tradition, numerous customs, beliefs, and policies central to the culture of Imperial China are said to have continued since the Zhou Dynasty. Among these is the Zhou belief in Heaven, and the Mandate of Heaven, a concept not shared by the Shang; the use of the term "Son of Heaven" (tiānzi) to refer to the Chinese emperor originates at this time.

The Western Zhou is said to have run from roughly 1045-771 BCE. It was founded by King Wu of Zhou, who defeated the armies of the Shang at Muye in 1045 BCE. The Western Zhou fell in 771 BCE to steppe nomad invaders, and the capital was moved to Chengzhou, in the east. This marks the beginning of the Eastern Zhou (770-256 BCE), a period of considerable disunity and violence. The Eastern Zhou period is divided into the Spring and Autumn and Warring States Periods of Chinese history.

Fairly decentralized, the Western Zhou operated as a quasi-feudal, multi-state system, often contrasted to the centralized, bureaucratic state established in the Han Dynasty, and maintained by every major dynasty since (with the obvious exceptions of periods of disunity, such as the period of Five Dynasties and Ten Kingdoms which followed the fall of the Tang Dynasty).[1] This quasi-feudal structure consisted chiefly of domains granted by the emperor to his close relatives, generals, or retainers otherwise. In theory, these were tied closely to the state by the personal loyalty or kinship ties of the lords to the emperor; however, as lordship of domains was passed down hereditarily, within even a single generation the ties of loyalty and kinship could weaken dramatically. The Zhou gained further territory, both through conquest and peaceful alliances, naming the local rulers of those areas "lords" in a similar fashion, and establishing fictive kinship ties which were meant to help assure these domains' loyalties.

Loyalty and connection between the Zhou kings and their vassal states grew weaker and weaker, until around 771 BCE, the Zhou capital was sacked by either steppe nomads, or by an alliance of vassal states. King You of Zhou was killed in the attack, and his successor, King Ping of Zhou, survived only by being spirited away to Chengzhou, in the east, and protected there by lords of two of his supposed vassal states. This arrangement, in which the Zhou remained nominally superior but was in fact entirely reliant on its nominal vassals - states which were otherwise for all intents and purposes independent - would characterize the Eastern Zhou for the remainder of the period. The most prominent of these independent states included the States of Qi in modern-day Shandong province, Jin in Shanxi, Chu in the area of the Yangtze River, and Qin in Shaanxi.

The Eastern Zhou saw a number of important technological and governmental developments, including the advent of the Iron Age around 600 BCE, and the spread of soybean cultivation from Manchuria into China proper around that same time. Beginning in 594 BCE, the State of Lu became the first to implement a system of collecting taxes directly, rather than having them paid to the local landlord.