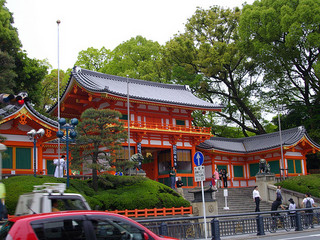 The main gates of Yasaka Shrine.

Yasaka Shrine, known as Gion Shrine up until the Meiji period, is the central Shinto shrine in Kyoto's Gion district. The shrine faces Shijô-dôri, and backs on Maruyama Park.

The shrine shares its origin with the Gion Matsuri (Gion Festival). In 876, the priest Enjo established the shrine, and invited Emperor Gozu, the kami of preventing illnesses, to the site, in the hopes of combatting the diseases and disasters that Kyoto was suffering from at the time.

Yasaka Shrine is dedicated to Susano-o-no-Mikoto, Kushinada-hime-no-Mikoto, and their son Yahashira-kami, and is a particularly popular site for New Year's visits.

The shrine suffered significant damage in a fire in 1867 (Keiô 2/12/6) which destroyed the main worship hall (Haiden), main and middle gates, and other structures.[1] Most of these structures were later rebuilt.