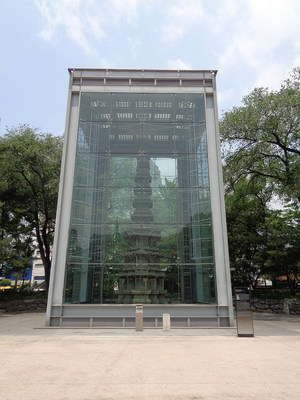 Wongaksa was a notable Buddhist temple in Hanseong (Seoul), established by King Sejo of Joseon in 1465. The former site of the temple is today Tapgol Park, a public park associated with the 20th century anti-Japanese independence movement.

The temple was established by King Sejo in 1465. Two years later, in 1467, a ten-story stone pagoda was completed, and in 1471, King Sejo ordered the construction of a monument recording the construction and dedication ceremony. The temple fell into decline by the end of the 15th century, or in the early 16th century, however, as King Yeonsangun had homes in that neighborhood pulled down; in the process, the temple lost many of its local supporters.

The pagoda and stone monument are all that survive of the temple today; they remain on the former site of the temple, in what later became Seoul's first public park, and have been designated National Treasures of Korea #2 and #3.