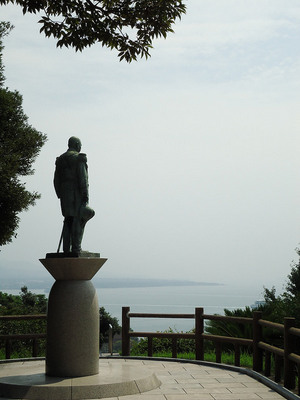 Admiral Tôgô Heihachirô led the Imperial Japanese Navy (IJN) to victory over that of Imperial Russia in the Russo-Japanese War of 1904-1905.

Tôgô was born in 1847, in the Kajiyamachi neighborhood of Kagoshima. He was fifteen years old when in 1863 the British Royal Navy shelled the city, battling Satsuma domain's small navy and coastal defense batteries. Inspired by this experience, Tôgô joined the Satsuma navy in 1868, and in 1871 traveled to London to study. He returned to Japan in 1878 and entered the Imperial Japanese Navy, becoming a lieutenant (大尉) that year. Tôgô then rose to commander (中佐) in 1885, and captain (大佐) the following year.

In 1893, Tôgô was commander of the IJN cruiser Naniwa, which he stationed in Honolulu harbor for several months. Amidst increasing international tensions over control of the islands, the Naniwa was a show of force for Japanese interests in maintaining the sovereignty & independence of the Hawaiian Kingdom, and was present to aid, protect, or rescue Japanese in the islands if circumstances came to that. Prince Yamashina Sadamaro, incidentally, served under Tôgô, as a lieutenant aboard the Naniwa at that time.[1]

The following year, he participated in the Sino-Japanese War, still as commander of the Naniwa. He was then promoted to rear admiral in 1895. He continued to move up the ranks quite quickly, being named head of the Naval Academy in 1896, and vice-admiral in 1898. In 1903, Tôgô was named commander of the Combined Fleet, being promoted to the rank of full admiral the following year.

Immediately following his victory in the Russo-Japanese War, Tôgô was formally received in audience by the Meiji Emperor, at the end of a victory parade through the streets of Tokyo held on 1905/10/22. Though the Meiji Emperor is known for appearing in public in an army uniform, this audience was the first time he wore a navy uniform.

Tôgô was elevated to gensui (fleet admiral) in 1913. The following year, he became personal tutor to Crown Prince Hirohito. Tôgô died at age 88 in 1934. He was awarded the Collar of the Supreme Order of the Chrysanthemum, and was given a state funeral. Though Tôgô is buried in Tama Cemetery in Tokyo, a portion of his remains were buried at a site in Kagoshima's Tagayama Park, alongside a large bronze statue of Tôgô which looks out over the city's harbor.