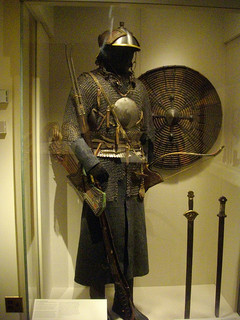 Tibet is a center of Himalayan Buddhism, and was a powerful independent kingdom for many centuries, until its conquest by Chinese Communist forces in 1949. Never controlled by a Chinese dynasty until the 1720s, Tibet remained under Qing control only until the end of that dynasty in 1911. The following year, imperial officials and garrisons vacated the region.[1]

By the eighth century, Tibet had become one of China's most powerful neighbors; from the 760s-780s, Tibetan forces raided the Tang Dynasty capital of Chang'an every autumn. Raids grew less frequent after that, but continued into the 9th century, when the kingdom of Tibet began to decline.

In the 1710s, a Dalai Lama was murdered. The Kangxi Emperor, claiming the successor to have been chosen improperly, used this as justification to invade Tibet. Two Qing armies, under the banner of righteous retribution for the Lama's murder, entered Tibet from Qinghai and Sichuan provinces, meeting up together in Lhasa in 1720, and installing a new Dalai Lama, loyal to the Qing.[2] Tibet was named a Qing protectorate in 1751.[3]