The tanuki (Nyctereutes procyonoides), sometimes correctly translated "racoon-dog" or, incorrectly, "badger" or "raccoon", is a small omnivorous canine indigenous to Japan. Its most recognizable feature is the black marking around its eyes, and it is easily distinguished from the raccoon by the lack of black tail rings. Throughout history, until recently, tanuki were thought to be the same animal as the mujina, an actual badger. They have been hunted for their pelts for much of history, and there is even a saying about "counting the skins of tanuki that haven't been caught", similar to the Western saying about unhatched eggs.

Tanuki are thought to be dim-witted and absent-minded, decadent and licentious. They are one of the many animals in Japanese folk belief that are thought to have the ability to shape-shift or, like foxes, cast illusions. In fact, many of the traditional monsters (obake) of Japan are thought to be transformations of the tanuki or other such animals. These transformations are sometimes said to be facilitated by the placement of a leaf or a bone on the animal's head. Tanuki are also used as excuses for drunken stumbling, called ashimagari 足曲がり, with stories claiming that their tails coil purposefully around the legs of those out walking late at night. Tanuki are also believed to be responsible for some of the many sound phenomena in isolated rural areas, such as the sound of a tree being cut down when no tree has actually fallen, or false cries that a village is on fire. They will also roll stones down mountains at people or take the shape of firewood bundles to trick people. 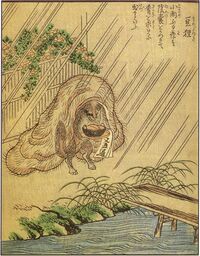 Mamedanuki 豆狸, a tanuki using its distended scrotum as a shelter from the rain.

Ceramic tanuki statues are often seen outside Japanese businesses and people's homes. They are usually depicted as rotund animals wearing a straw hat, carrying a bottle of sake and a written bill. In such statues the tanuki's scrotum is usually engorged; and indeed much tanuki folklore is associated with this part of male anatomy. It is said that a tanuki can stretch the skin of its scrotum to the size of an eight-mat room (a room the size of eight tatami mats). One old tale even tells of such a room in which many people gathered, seeking shelter from the rain, until one of them dropped his cigarette on the floor, causing the tanuki to yelp in pain and thus expose himself. Tanuki have also been depicted in art using their scrotum as a sort of fleshy umbrella, or to dress it up in certain props to make it look like another monster. There is a popular folk song which goes, "Tan tan tanuki no kintama wa, Kaze mo nai no ni, Bura bura bura"; meaning, roughly, "Tan tan tanuki's balls, even when there's no wind, go swing-swing". But the most famous aspect of the tanuki's scrotum is that, at night, the animal will inflate it to a great size and use it as a drum in its many parades, the sound of which can be heard from great distances as pon poko pon. (It is also said that they may beat their bellies to make this sound.) In contexts most concerned with this aspect, the tanuki is sometimes called mamedanuki 豆狸.

Some folktales also have the tanuki being able to transform his scrotum into a variety of other objects, including boats, clubs, sleds, shop signs, fishing nets, puppets, or parade floats.[1]

Lastly, there is a Japanese proverb that goes, Toranu tanuki no kawa zanyô, meaning roughly "to count the worth of the pelts of tanuki that haven't yet been caught", a sentiment equal to the similar Western saying about counting chickens before they hatch.

Tanuki in Folk Stories and Legends

Two of the most popular of Japanese folktales deal with tanuki. In "Kachikachiyama” (“Crackling Mountain"), a farmer catches a tanuki in a trap, and, in revenge, while he is in the fields working the tanuki tricks the farmer’s wife into letting him go. The animal kills the wife, chops her and makes a stew of her, and takes the shape of the farmer’s wife in order to serve the stew to the farmer. After this happens, the farmer tells his friend the rabbit about his troubles. The rabbit, sympathetic to the farmer’s misfortune, decides to make it his mission to torment the tanuki. First, he invites the tanuki up into the mountains, and while they are collecting firewood, the rabbit lights the wood bundle on the tanuki’s back on fire. When the latter asks about the sound of the wood burning, the rabbit replies, “Oh, that’s just the sound of Crackling Mountain. It always sounds like that up here.” Finally, the fire reaches the tanuki, who runs down the mountain screaming. The story usually ends when the rabbit and tanuki go fishing, the latter in a boat of clay which dissolves in the water, drowning the vicious tanuki.

The second of these tales, "Bunbuku Chagama" (often called "The Lucky Teakettle of Morin Temple”), features a decidedly less antagonistic tanuki. In this story a tanuki pretending to be a teakettle is sold to a priest at Morinji Temple, and is discovered when the priest tries to put the kettle over a fire to boil water. There are many varying versions of this story, and in most, the tanuki usually helps the priest by continuing to pretend to be a kettle which the priest sells repeatedly, the tanuki running back each time.

A legend collected by Seki Keigo, a colleague of Yanagita Kunio, tells of a man from the village of Aone who was returning home from a celebration one night, carrying some cooked fish. A group of boys suddenly came out and distracted him, and when they were gone, so was his fish. Another legend collected by Seki from Okawachi village tells of a man returning home late who meets his wife not far outside of his village, who beat him with an umbrella for returning so late. But when he arrived at his house, his wife was inside and claimed to have not been outside all day. Many other such tales have been told all over Japan.