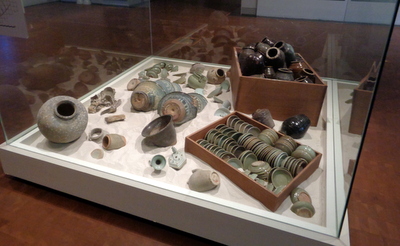 A small portion of the ceramics from the shipwreck. On display at the National Museum of Korea.

The Sinan shipwreck was that of a ship from Ningbo which sank off the Korean coast in 1323, carrying some 8,000 strings of coins, more than 24,000 porcelains and ceramics,[1] in addition to other cargo. Discovered and excavated in the 1970s-1980s, the find was noted for its unusually nearly intact cargo. The shipwreck provides numerous valuable insights into medieval maritime trade, ceramics styles, currency, etc.

The discovery of the shipwreck began in 1976 with a fisherman's discovery of a celadon vase near the coast of Sinan county, South Korea. Excavations took place over the next eight years.[1]

The ship contained numerous wooden tablets featuring Japanese names, including one of a kanjin hijiri working to collect funds for construction efforts at the Kyoto temple Tôfuku-ji, which had been severely damaged in a fire in 1319. The cargo also included numerous works of porcelain from Jiangxi province, celadons from Zhejiang province, and other ceramics from elsewhere in southern China, along with roughly 28 tons of Song Dynasty coins, loaded into the keel as ballast.[1] Excavation efforts also brought up roughly 1,000 pieces of sandalwood and some 720 fragments of the ship's hull.[1] Brass, tin, copper, and bronze items, including ladles, cooking pots, and measuring tools, were also found, along with cinnamon, pepper, cloves, and other spices; seeds; lacquerwares; weapons; game pieces and game boards; Buddhist statuettes; and other ritual implements. The 8,000 coins found in the shipwreck weighed a total of some 28 tons, and included coins as old as a huaquan coin from 14 CE, and ones as new as Zhida tongbao and Dayuan tongbao from 1310; 340 ingots of precious metals were also found.[1]