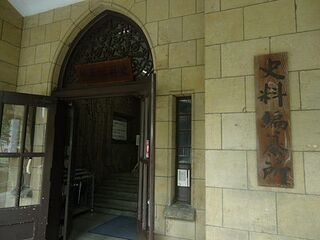 The entrance to Shiryôhensanjo, at the University of Tokyo

The Shiryôhensanjo, also known as the Historiographical Institute of the University of Tokyo, is one of the most preeminent scholarly archives in Japan. Among a great many other materials, the Institute houses a National Treasure, the Documents of the Shimazu clan (Shimazu ke monjo).

The Institute traces its origins to a wagaku (Japanese studies) lecture hall established by kokugaku scholar Hanawa Hokiichi in 1793, which was reorganized in 1869 into the Shiryôhenshû kokushi kôseikyoku (roughly, "document editing/compiling national history school & office"). Three years later, a history section was created within the Dajôkan, and the shiryôhenshû kyoku became the shûshikyoku (history compilation office). The office was then absorbed into the newly established Tokyo Imperial University in 1888.

The organization published their first catalogs of historical documents in 1901, a Dai Nippon shiryô, and Dai Nippon komonjo. In 1906, they took over custody of a collection of Bakumatsu period diplomatic documents from the Ministry of Foreign Affairs.

The main hall of the university was completed in 1928, and the office was officially renamed Shiryôhensanjo the following year.

Following World War II, in 1949, the institute took over custody of a collection of documents related to the Meiji Restoration, from the Ministry of Education. The following year, the institute was officially made a research center (kenkyûsho) of the university. The new building (shinkan) was completed in 1973.